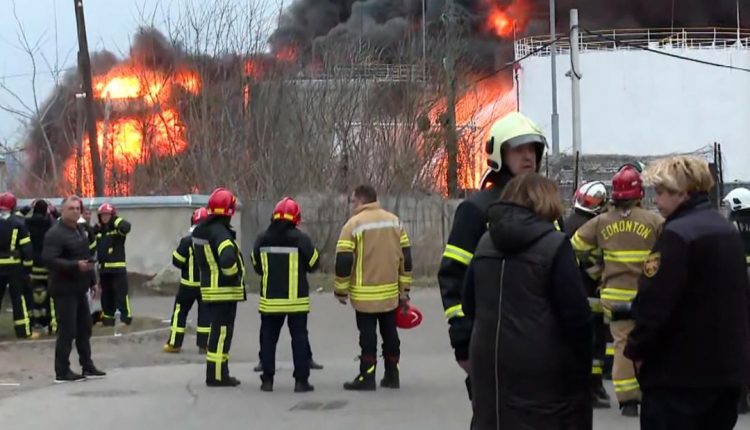 The conspiracy theory, which is being spread in multiple languages ​​by pro-Russia accounts and others, is that CNN video from the Lviv fire on Saturday was actually filmed in the Canadian city of Edmonton.

Why would anyone say such a thing? Because, as CNN anchor Don Lemon was reporting live from the Lviv fire, a firefighter seen behind him was wearing a coat that said “EDMONTON” on the back.

But that’s not fishy. There is a good reason that a firefighter in Lviv would be wearing an “EDMONTON” coat.

Facts first: The “EDMONTON” coat was donated to firefighters in Ukraine by firefighters in Edmonton. An Edmonton-based nonprofit called Firefighter Aid Ukraine has donated “several hundred” sets of Edmonton turnout gear to Ukraine, plus hundreds of additional sets of turnout gear from other communities, founder and project director Kevin Royle, an Edmonton firefighter himself, told CNN on Sunday. The coat seen on CNN “came from our program, most definitely,” Royle said. And there is no doubt that Russia attacked the Lviv fuel facility; its defense ministry publicly confirmed the strike on Sunday.Founded in 2015, Firefighter Aid Ukraine has supported Lviv firefighters for years. On Monday, the nonprofit resurfaced a photo it had originally posted on Facebook in 2017 — of its team in Lviv handing out a coat that said “EDMONTON” on the back, just like the one seen on CNN on Saturday. Canadian broadcasters CBC and Global News ran stories in 2017 about this Firefighter Aid Ukraine donation trip. “See the ‘Edmonton’ on the back of the jacket? There is no conspiracy,” Firefighter Aid Ukraine posted Monday about the 2017 photo. “Our firefighter friends and colleagues are in [harm’s] way and we will continue to support them.”Royle said CNN’s Saturday coverage from the Lviv fire actually showed three firefighters wearing donated Edmonton gear, though only one coat said “EDMONTON.” Royle said that donated gear is usually stripped of city identifiers before it arrives at his nonprofit for shipping to Ukraine, but occasionally some items don’t get stripped. Edmonton’s fire chief posted a Facebook message on Monday confirming that the “EDMONTON” coat seen on CNN was donated from Edmonton.The Edmonton area has long had a large Ukrainian community, with about 160,000 residents of Ukrainian ethnic origin in 2016, according to Canada’s 2016 census. Canada has one of the world’s biggest Ukrainian populations, with more than 1.3 million people of Ukrainian ethnic origin in 2016. After the Russian invasion of Ukraine this year, firefighters in Canada, the US and various other countries have donated gear to their Ukrainian colleagues.