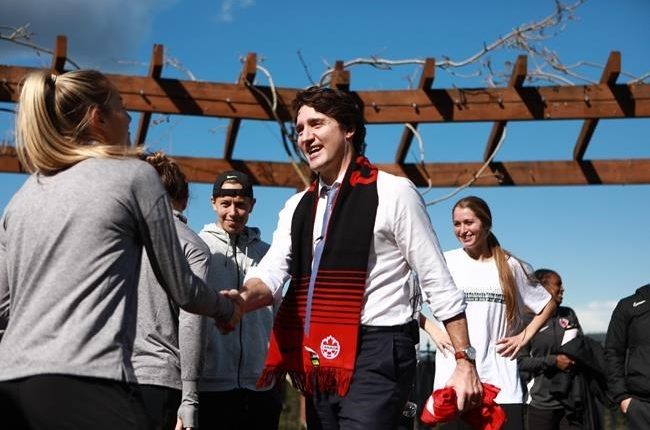 Trudeau visits Edmonton, assessing your personal COVID threat : In The Information for April 12

In The News is a roundup of stories from The Canadian Press designed to kickstart your day. Here is what’s on the radar of our editors for the morning of April 12 …

What we are watching in Canada…

Trudeau will start the day with a live interview on Winnipeg’s 92.7 CKJS Good Morning Philippines at 7:45 am MT.

He follows that with an announcement in Edmonton highlighting tax cuts for small businesses.

At noon, he’ll visit a local small business accompanied by Associate Minister of Finance Randy Boissonnault, who is the MP for Edmonton Centre.

In the afternoon, Trudeau is scheduled to meet with members of the local Ukrainian and Afghan communities.

He will then visit a nature-based solutions lab to highlight Budget 2022 investments in green technologies.

At the beginning of the COVID-19 pandemic, retired teacher Lois Armstrong said local health officials where she lives in Kingston, Ont., provided daily updates about outbreaks, cases and deaths in the community.

Now, Armstrong, 68, said the public is being asked to take a bigger role in managing their risk but information from health authorities is less available than before. Data such as the location of outbreaks, meanwhile, is no longer made public, she added.

“I think it’s very difficult for the average person to assess their own risk,” Armstrong said. “Kingston is one of the hot spots of Ontario, but they still are only posting the information three times a week, and you can’t go get tested unless you’re really high risk or really sick. So there’s no way of knowing. “

Health experts agree with Armstrong. Provincial governments are telling Canadians to estimate their own sense of risk but those same governments are reducing the amount of data available to residents, they say.

“There’s no question that people are being provided less data,” said Tara Moriarty, a University of Toronto professor in the faculty of dentistry who studies infectious diseases. “It’s particularly critical because people have been made responsible for how they handle the pandemic and the decisions they make.”

Ontario, Quebec and Newfoundland and Labrador are the only provinces that report daily COVID-19 data, she said in an interview Monday, adding that Canada does less COVID-19 testing per capita than other wealthy countries.

The website counts both PCR and antigen test results that are made public.

What we are watching in the US…

FAIRFAX, Va. _ A jury in Virginia is scheduled to hear opening statements Tuesday in a defamation lawsuit filed by Johnny Depp against his ex-wife, Amber Heard.

Depp says Heard libelled him when she wrote an op-ed piece in The Washington Post in 2018 referring to herself as a “public figure representing domestic abuse.”

Depp is never mentioned by name, but he says the article implicates him nonetheless because it refers to past accusations Heard made when she sought a restraining order against him. Depp denies the abuse allegations.

A civil jury of seven members, plus four alternates, was selected Monday to hear the case in Fairfax County Circuit Court. Heard’s lawyers had sought to have the case tried in California, where the actors reside. But a judge ruled that Depp was within his rights to bring the case to Virginia because The Washington Post’s computer servers for its online edition are located in the county.

The trial is expected to last for more than a month.

A lengthy witness list includes actors Paul Bettany and James Franco, and tech entrepreneur Elon Musk. Some witnesses are slated to appear in person, while others are scheduled to appear via video link.

What we are watching in the rest of the world…

KYIV, Ukraine _ Corpses are now “carpeted through the streets” of Mariupol after Russian troops killed more than 10,000 civilians over the past six weeks in their unsuccessful fight to capture the strategic southern port, the mayor said, while Western powers warned a convoy was on the move for a suspected Russian assault in Ukraine’s east.

Mariupol has been the site of some of the heaviest attacks and civilian suffering in the 6-week-old war, but the land, sea and air assaults by Russian forces fighting to capture it have increasingly limited information on circumstances inside the city.

Speaking by phone Monday with The Associated Press, Mariupol Mayor Vadym Boychenko accused Russian forces of having blocked weeks of attempted humanitarian convoys into the city in part to conceal the carnage. Boychenko said the death toll in Mariupol alone could surpass 20,000.

Boychenko also gave new details of allegations by Ukrainian officials that Russian forces have brought mobile cremation equipment to Mariupol to dispose of the corpses of victims of the siege.

Russian forces have taken many bodies to a huge shopping center where there are storage facilities and refrigerators, Boychenko said.

“Mobile crematoriums have arrived in the form of trucks: You open it, and there is a pipe inside and these bodies are burned,” he said.

Boychenko spoke from a location in Ukrainian-controlled territory but outside Mariupol. The mayor said he had several sources for his description of the alleged methodical burning of bodies by Russian forces in the city, but did not further detail the sources of his information.

The discovery of large numbers of apparently executed civilians after Russian forces retreated from cities and towns around the capital, Kyiv, has already prompted widespread condemnation and assertions that Russia is committing war crimes in Ukraine.

Women in Ontario won the right to vote.

LOS ANGELES _ Britney Spears, less than five months after her conservatorship ended, confused some fans Monday when she posted on Instagram that she’s pregnant, and apparently married.

“I lost so much weight to go on my Maui trip only to gain it back,” the pop star wrote in part Monday, accompanied by a photo of flowers and a cup of coffee. “I thought ”Geez … what happened to my stomach???” My husband said “No you’re food pregnant silly!!!” So I got a pregnancy test … and uhhhhh well … I am having a baby. …”

Spears _ with liberal use of various emojis _ didn’t name partner Sam Asghari as the “husband” and added: “I obviously won’t be going out as much due to the paps getting their money shot of me like they unfortunately already have.”

While some, including Paris Hilton, congratulated Spears Monday evening, Asghari added an Instagram post of his own accompanied by a painting of a lion family with three members.

“Marriage and kids are a natural part of a strong relationship filled with love and respect. Fatherhood is something i have always looked forward to and i don’t take lightly. It is the most important job i will ever do,” he wrote .

Spears spoke of suffering from perinatal depression in the past, calling it “absolutely horrible” and saying she’s heartened that the condition is spoken of more freely among women now than at the time of her previous go arounds with her sons, ages 15 and 16 She shares the teens with ex Kevin Federline.

She said “some people considered it dangerous if a woman complained like that with a baby inside her … but now women talk about it everyday … thank Jesus we don’t have to keep that pain a reserved proper secret … This time I will be doing yoga every day!!! Spreading lots of joy and love!!!”

The 40-year-old Spears has said she longed for a baby with the 28-year-old Asghari, a personal trainer, but she has said the nearly 14-year-long conservatorship forced her to remain on birth control. The two met on the set of her “Slumber Party” video in 2016.

Did you see this?

VANCOUVER _ British Columbia mayors whose communities were devastated by last year’s flooding and wildfires want the federal government to deliver billions of dollars in promised funding as soon as possible.

Abbotsford Mayor Henry Braun said he was among 28 mayors and members of regional districts who met with federal and provincial politicians Monday to ask about the delivery of $5 billion from Ottawa.

He said the estimated cost of bringing three dikes up to provincial standards following unprecedented flooding on the Sumas Prairie is as high as $2.9 billion, with most of the funds expected to come from the federal government.

In November, the banks of the Nooksack River in Washington state overflowed, flooding the Sumas Prairie in Abbotsford as a record shattering 540 millimeters of rain fell.

“Construction companies are hard to find, consultants are hard to find right now because there is so much damage that was done,” Braun said of repairs or new infrastructure needed, which could take five years, depending on public feedback on four possible options involving a pump station and dikes.

The preferred option will be presented in about six weeks to council for a report, which would be sent to senior levels of government, Braun said.

Federal Emergency Preparedness Minister Bill Blair said Monday he sees the urgency of facilitating recovery efforts in various areas of the province and has heard the concerns of mayors about destruction from floods and a wildfire that nearly destroyed the town of Lytton last summer.

He did not provide a timeline for when the money would be disbursed to communities but said there are some complexities in making decisions about prioritizing the spending of a limited amount of funding that will involve “difficult decisions.”

This report by The Canadian Press was first published April 12, 2022.

Winner Introduced! Enter for an opportunity to win 2 tickets to see John Cleese Reside in Edmonton!!