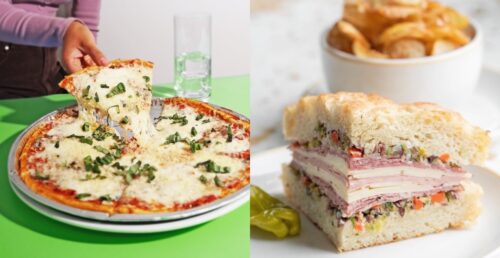 three Edmonton restaurant openings to sit up for this month

Last month saw some sad closures, but there are so many new Edmonton restaurant openings to look forward to.

Next month, several exciting new Edmonton restaurants and bars will open their doors.

Here are three Edmonton restaurant and bar openings to look forward to in August.

Opening in Old Strathcona, it looks like this will be a must-try spot with fresh sandwiches, sides, drinks, and more.

Shrouded in even more secrecy, we haven’t been able to see the menu yet, but there have been a few peeks at a few dishes to expect to try.

Veggie sandwiches on fresh bread, packed with sprouts and house-made spreads will be available, and so will Cubanos, meatball subs, egg salad, and Italian sandwiches with cheese on muffuletta, a Sicilian sesame bread.

Opening at the start of August, this is the first Canadian location for the US-based concept that specializes in California-style pizzas, pasta, and salads.

The CPK Edmonton menu items will include tasty dishes like the Dynamite Shrimp, Shanghai Power Bowl, California Tacos with grilled lime chicken or crispy fish, and its CPK Classics, like The Original BBQ Chicken Pizza and Thai Crunch Salad, to name a few.

This spot is known for its Lan Zhou traditional hand-pulled noodles. It’s trendy in Toronto with three locations, and Edmonton will soon be getting its own.

Opening sometime this summer (likely in August), this new outpost will be arriving at West Edmonton Mall.

There are more than 10 different kinds of noodles bowls at Mogouyan.

Some of these dishes are served in a savory broth, like the classic beef noodle bowl; some are stir-fried, like the signature noodles; some are even served dried and flavoured, while others might be served cold.