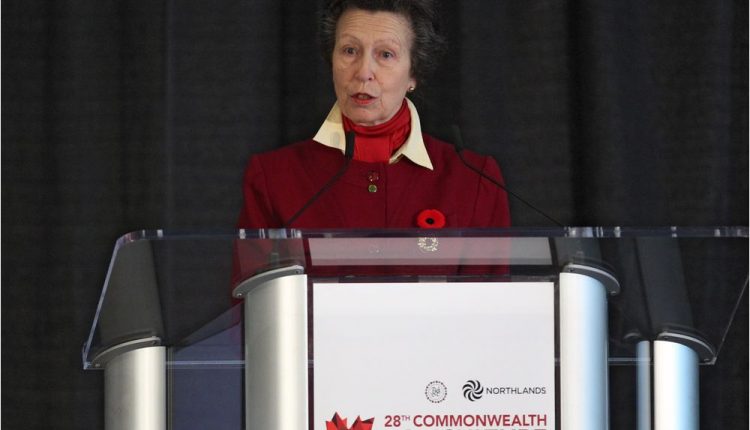 Princess Anne reflected on cattle and farm succession during a speech at an agriculture conference in Edmonton on Tuesday.

The British Princess gave the opening address at the biannual conference of the Royal Agricultural Society of the Commonwealth (RASC), of which she is President. She should also designate a river valley walkway in honor of her mother, Queen Elizabeth II, later Tuesday.

It was the Princess’ first visit to Edmonton.

“As we have heard, Alberta provides an exceptional backdrop for this international discussion on food and agriculture,” she said during a speech at the Expo Center at the official opening of the 28th Commonwealth Agriculture Conference, which runs through Thursday.

Despite a strong base in livestock and grain production, the Princess said the Alberta agricultural sector is facing challenges that can be seen around the world, including land access, environmental issues, and succession planning as the agricultural population ages.

As Princess Anne spoke, a pen full of cattle could be seen through the floor-to-ceiling windows of the banquet room.

Anne, who is Princess Royal, said the RASC was founded in 1957 to promote the exchange of ideas between farmers in Commonwealth countries. The Commonwealth today comprises 53 countries, which make up about a third of the world’s population.

“Although agriculture has changed a lot since 1957 and will continue to change, the common denominator that connects everything – the safe production of food – remains absolutely the same,” she said.

With a royal in attendance, the event was hard to record. The media was advised to greet the princess as “Your Royal Highness” followed by “Ma’am” should they pass her in a common area. Bows or curtsey were not required, but were considered acceptable, according to a keeper of the minutes, adding that photography for personal use is prohibited and “crafty or solicited self-photography” is frowned upon.

The princess is due to unveil the Edmonton Commonwealth Walkway during a ceremony on Tuesday evening at the government building.

The first such walkway opened in Banff last year, according to a press release. Lt. Gov. Lois E. Mitchell “won” the Edmonton Walkway “to honor Her Majesty the Queen’s longstanding service and to celebrate the shared values ​​of democracy, human rights and the rule of law that unite the Commonwealth of Nations. “, It said in the publication.

The sidewalk is funded by private donors.

What metropolis providers are open and closed for Thanksgiving in Edmonton?