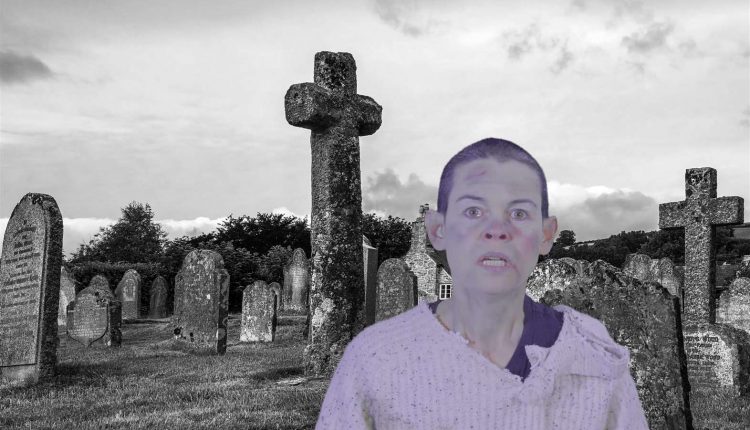 The Witch of Edmonton online, March 5-20, Review by Jon Lewis

Creation Theater Company reaffirmed its commitment to programming online theater for a worldwide audience by staging Laura Wright’s modern-dress production of William Rowley, Thomas Dekker and John Ford (and possibly John Webster)’s rarely performed Jacobean tragicomedy The Witch of Edmonton on its bespoke platform auditorium. At its heart is the true story of a woman, Elizabeth Sawyer, accused of being a witch and killed for her ‘crimes’ in 1621, after which the playwrights wrote their play.

The original’s satirical scenes are merged by Wright with elements of documentary theater with recitations of the testimony of witches murdered throughout the seventeenth century. Sawyer (a gnarly, cropped haired Anna Tolputt) conjures up a malevolent devil-dog, Tom (Ryan Duncan, incisors to make a vampire jealous) who, through the magic of Auditorium, is superimposed on top of Sawyer’s figure as if he’s a succubus inhabiting her body. His catchphrase is ‘bow wow wow’, intoned after Faust-like temptations of gullible humans, a comic fusion of Hammer Horror and Carry On. Sawyer is a loner, depicted standing before photographs of bleak woods, desiring revenge on the community that’s ostracized her. Tolputt’s witch is a peasant woman, alienated by class more than witchcraft from the well-heeled characters she’s hostile to, rasping ‘don’t call me witch’ to her accusers.

The Witch of Edmonton

The production’s other plotline involves one of Sawyer’s community, Frank (Guy Clark, thin mustache, tweedy clothes, affecting an ordinariness like a bank manager) who worships the devil- dog separately to Sawyer. His wife Winnifride (Lola Boulter) is pregnant, but he’s pressured by his elders into entering a bigamous second marriage to Susan (Chloe Lemonius). With the help of the devil-dog he murders Susan with a sharp knife – more clever wizardry with actors performing in different locations in front of green screens – only for his crime to be discovered by Susan’s sweet sister, Kate (Leda Douglas). Both Sawyer and Frank are executed, the latter forgiven by the ‘respectable’ elders (Graeme Rose, Giles Stoakley, PK Taylor), the former unlamented because of her gender.

It was fascinating seeing this intriguing play for the first time: another necessary innovation from Creation Theater Company.

The Witch of Edmonton