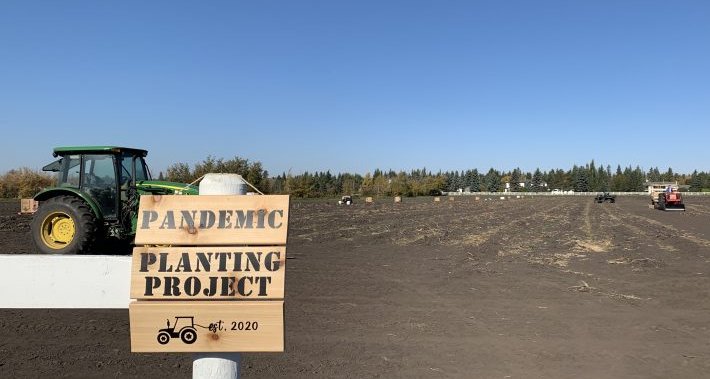 About six years ago, David Benjestorf and his wife bought 23 acres northwest of Edmonton in Sturgeon County.

He had always imagined that one day, when he either retired or had some free time, he would become a hobby farmer – but that was hard to find.

Benjestorf is a daytime attorney and vice chairman of the Edmonton Food Bank.

When the pandemic broke out, the realities of what many people might go through began to decline.

“The demand for food at the table was astronomical, and that was floating around in the back of my mind,” said Benjestorf.

In April, he was inspired by a Netflix show called The Biggest Little Farm, which is about an urban couple who leave it all behind to start a farm.

“To me it was like a lightbulb going out: I can do that,” he said.

“I said right away that we were going to open a vegetable farm for the Edmonton Food Bank.”

However, Benjestorf has never grown anything – “zero experience,” he said.

By May he planted six and a half acres of potatoes in his huge garden.

In another, smaller garden, he planted 22 different types of vegetables.

He and his many volunteers have been busy harvesting the past four weekends.

“I’ve found a dozen friends, family and colleagues who have agreed to donate a day or two of their time each week,” said Benjestorf.

In total, they harvested nearly 100,000 pounds of potatoes.

“It just shows that [Edmonton is] a city with volunteers and volunteering and is not afraid to help those in need. “

Jay Ball has been volunteering the garden for the past three Saturdays.

“It’s pretty fulfilling,” said Ball. “Ultimately, you know what you’re doing and I have some time on the weekends.”

He said that while harvesting is hard work, it’s also great fun.

“For me it was a total escape,” said Ball.

“A lot of positive things”: Western farmers are finishing the harvest early and are looking for improved prices

“It just takes that stress away,” he said. “You know you are doing something good, but your mind can focus on something else.”

October 3rd was the last day of harvest. The feeling of fulfillment mixes with sadness.

“I will miss it. It was wonderful to put my hands in the ground, get dirty and help others in need, ”said volunteer Michelle Turcotte.

Benjestorf explained the feeling as bittersweet.

“I’ve never grown anything before; I’ve never had a garden, ”said Benjestorf. “I can now plant, care for, raise something, work with a group of friends and volunteers, deliver it to the board, and then hand it out at the other end.”

Now he is looking forward to applying what he has learned into the next season.

“I’m excited for the project to grow,” he said.