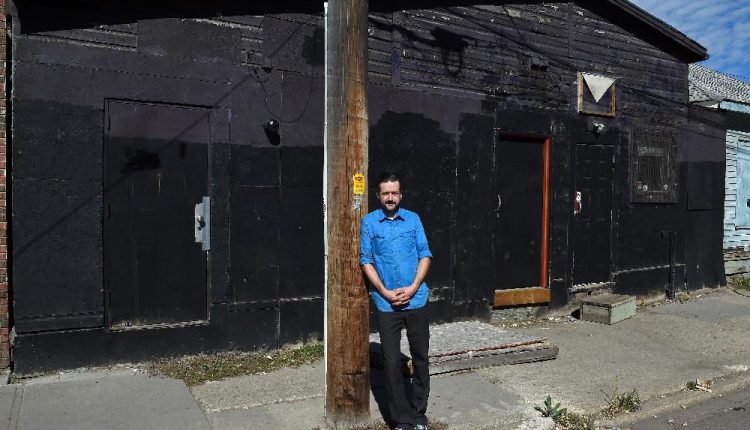 Two historic Edmonton buildings, the Mitchell and Reed Auction House and the Graphic Arts Building, both on Jasper Avenue near 95.

Darren Radbourne in front of the Edmonton Artery on September 12, 2015. Two art buildings need to be demolished to make way for the new Valley LRT line. Photo by John Lucas /Edmonton Journal

City councils voted to race against the clock on Friday to save the ARTery, an art hall in a centuries-old wooden structure that has already been propped up in some places.

“We have to be realistic about what it takes,” warned Mayor Don Iveson of a space full of artists, musicians and heritage advocates. “I really want to be realistic so as not to raise false hopes.”

Two historic buildings, the Mitchell and Reed Auction House and the Graphic Arts Building, both on Jasper Avenue near 95th Street, now stand on city-owned lots that officials plan to use to build LRT.

The city bought the buildings when it looked like a private developer would be willing to do the same and build something that didn’t live up to the administration’s vision for the prominent east entrance to the city center. Since they owned the land anyway, city officials suggested demolishing both buildings so that the property could temporarily be used to house dirt and building materials.

But they sparked a public outcry when they evicted the musicians. The auction house was home to ARTery, a popular live music venue with additional studio space.

Walter Trocenko, manager for housing and economic sustainability, said officials could potentially be able to relocate or dismantle the graphics building and incorporate essential parts into future buildings for about $ 1 million. He does not recommend moving the auction house. When the city bought the house, officials believed it was unsafe for occupancy.

Heritage advocates were reluctant to accept Edmonton’s proposals to keep only part of the building, calling it “facadism”. They expressed frustration that the city’s heritage council was not notified when the decision was made.

Musicians talked about the struggle for affordable studio space. Shout Out Out Out Out’s Clint Frazier said his options would be a half unheated garage on Whyte Avenue or his parents’ home on Bon Accord if his lease expires in 14 days.

“I am very concerned about how we got to this point. We were lucky we got it, ”said Coun. Ben Henderson, who said the city needs leadership to take steps to preserve historic buildings it owns if private builders are to do the same. In addition, the musicians moved into the neighborhood here when others were afraid to walk across the sidewalk. If Edmonton wants people to move to East Downtown, it needs people like that.

Administration is due on October 6th.

Iveson said he hoped the 1938 Graphic Arts Building could at least be preserved. “I’m a big fan of Art Deco and it’s one of the few examples in town,” he said, indicating the highly symmetrical, streamlined look. The federal building on the grounds of the Alberta Legislature and the Garneau Theater are other examples.

“It was such a downtime here in the Dirty 30s,” he said. “You really stand out because we don’t have much of that legacy.”

Editor’s Note: This story has been updated to correct Walter Trocenko’s title as Housing and Economic Sustainability Manager.