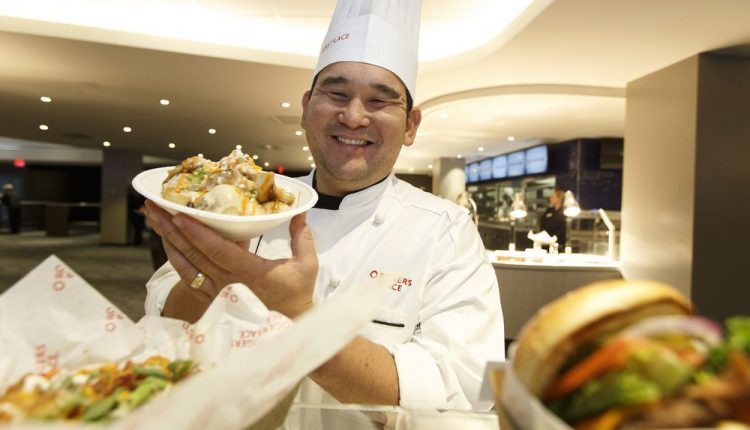 Rogers Place made a huge impact on the downtown dining landscape in 2016 and spawned some innovations of its own, including Perogy Nachoes. Photo by Ian Kucerak /Mail media

In 2016, Edmonton saw the aftermath of a poor economy, hellish forest fires, and a political landscape that is getting stranger by the day. Yet despite everything, there was food for comfort and support.

A plethora of new restaurants, some spurred by the opening of Rogers Place, sprang up like cheeky sunflowers across the region as local chefs and producers join forces to create new dishes and experiences we are all proud of make to live here.

The Edmonton scene gets bigger, more complex, and richer each year with activities that focus on food. Every month there’s a new cooking class, food battle or championship, experimental pop-up, magazine option, restaurant, culinary festival, or culinary journey of discovery. This year a branch of chefs and restaurateurs was opened in YEG. Not one but two excellent local cookbooks have been published – Edmonton Cooks by Tina Faiz and Leanne Brown and Karlynn Johnston’s Flapper Pie and a Blue Prairie Sky.

Edmonton entrepreneurs use crowdfunding to create groceries from caramel to sausage. New approaches to old ways, including experimentation with tipping, are proof that the food scene is getting smarter as restaurant owners find a way to make the most of their opportunities in an industry notorious for its tight margins.

Earls changed positions this spring and put Canadian beef back on the menu. Photo by Ian Kucerak

There are constants, however. Try taking away Albertan’s local beef and you will be hit hard on the head, as Earls found out when he tried to stop using Canadian beef in his growing chain of restaurants.

Here are some highlights of the thriving food scene in 2016 and a few words about the future as we enter another year of noshing.

Edmonton welcomed numerous Asian-style establishments, particularly Japanese ones, in 2016. Dorinku specializes in Japanese street food, Bistro Washuko has sushi hard, and Nudoru impressed the locals by making its own ramen noodles from scratch.

In the upscale cuisine, Edmontonians have been ridiculously spoiled, with the introduction of Chartier in Beaumont, Chef Daniel Costa’s newest venture, Uccellino, and the hippest spot in town, Bar Clementine, brought to you by Chef Roger Letourneau and his cocktail-crazy bartenders . Bodega Highlands adorned 112 Avenue with wine-and-tapas inspiration. Let Mercy hit that southern sweet spot.

Buco in St. Albert is opening a second location in downtown Edmonton in 2017. Photo by Bruce Edwards /Edmonton Journal

Speaking of gambling, restaurateurs are betting that downtown Edmonton will be in permanent boom mode with the opening of Rogers Place. Restaurants that are successful in other parts of the city, such as the Vivo in Westend and the Buco in St. Albert, equip rooms near the Eisviertel. Restaurants of all price ranges, from the budget-conscious Careit Deli and Sandwich and Sons to the more expensive Joey Bell Tower or Baijiu, have crossed their fingers.

Be sure to see Chef Ben Staley opening Alta and the Alder Room on Jasper Avenue in 2017. Chef Ryan Hotchkiss hopes to open Bundok in the Fox Tower soon. Ditto for the Crudo brothers (from Black Pearl Seafood and Cafe Amore) who are planning Bottega for the Yardstick Building on 104 Street. Eight thousand square feet of restaurant space is available in the Kelly Ramsay building, with rumors of a Jamie Oliver property but leasing agent Pangman Development Corp. Fans of authentic schnitzel will be delighted that the Falkenstein house has reopened after a fire.

As always, there are some sad closings to watch out for. Drift Food Truck moved to a brick and mortar store called Dovetail Deli in 2015, but closed a year later. Linda Kearney’s Dauphine, the popular bakery and bistro on 104 Street, has closed, as has Culina Mill Creek. Relish, the local Food on Film festival, quietly disappeared after two seasons. Scarf, an exciting online startup that was bringing home cooking to hungry people, has been shut down by Alberta Health Services. B’s diner had to give up on Whyte Avenue, but owner Brenda Der still hosted her Christmas dinner for the less fortunate. That is the ghost.

The city has also lost two beautiful people who cooked and cared for us for many years. Seasoned Solutions cook, educator and culinary tour guide Gail Hall died of breast cancer in November. Chef Maurice O’Flynn, a passionate supporter of the culinary community in the 1980s and 1990s, also passed away in November. O’Flynn, the father of former Westin hotel manager Ryan O’Flynn, once led the Canadian national culinary Olympic team to gold medal and was executive director of the Alberta Culinary Arts Foundation for 10 years.

The cocktail scene is downright exciting, brunch is booming and the terrace is still perhaps our favorite place to eat. We’re excited to see more simple, delicious, and affordable concepts hatch, including the new sausage spot Otto and Theo Psalios’ Greek Food in Little Village (due to the truck-to-snack-bar expansion in January at 14816 Stony Plain Rd.) .

Ritchie Market, with its food-focused brewery pub, opens in the beginning of the new year. The JW Marriott Downtown is also on the way, with a new high-end restaurant from the Oliver and Bonacini chain.

I hope the recent surge in food tours, including that of Edmonton Food Tours (where I am a tour guide), Blitz Fahrrad, and others on McCauley and Alberta Avenues, continues to introduce locals and visitors to the abundance of this county. Fabulous culinary and wine related events like Eat Alberta, Northern Lands and Vignettes Does Dining are a sign of increasingly promising variations. And maybe one day there will be Whole Foods.

Postmedia advocates a lively but civil discussion forum and encourages all readers to share their thoughts on our articles. It can take up to an hour for comments to be moderated before they appear on the site. We ask that you keep your comments relevant and respectful. We turned email notifications on – you will now receive an email when you’ve received a reply to your comment, there’s an update on a comment thread you’re following, or when a user you follow follows comments . Please refer to our Community Guidelines for more information and details on how to customize your email settings.