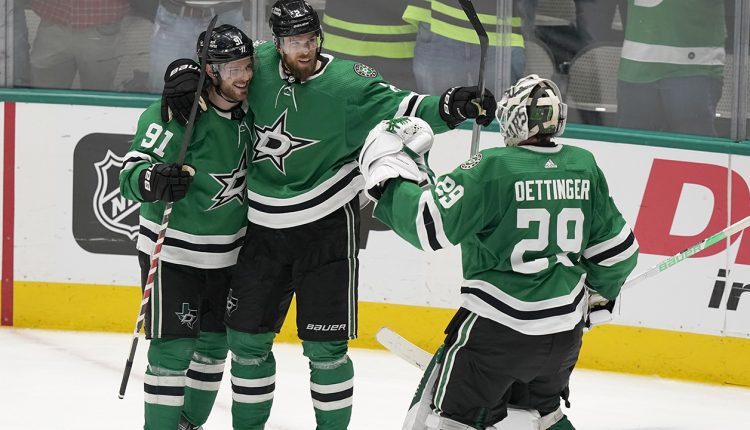 Roope Hintz and Denis Gurianov scored 24 seconds apart late in the third period, and the Dallas Stars rallied to beat Edmonton 5-3 on Tuesday night, handing their Oilers their first loss this season after scoring first.

Tyler Seguin added an empty-net goal at 19:41 for his 300th career score and Jason Robertson and Joe Pavelski added goals for the Stars, who won consecutive games for the first time since a four-game streak Feb 27-March 6. Jake Oettinger made 22 saves.

The Stars have 73 points in 62 games, giving them the second, and last, wild card in the Western Conference by one point over Vegas.

“With this league, you can be in and out (of a playoff berth) every game,” Seguin said. “It’s 20 games left, trying to get into that dance.”

“We had some players go out there, and they were determined to make a difference in the outcome of the game,” Dallas coach Rick Bowness said.

Kailer Yamamoto, Leon Draisaitl and Evander Kane scored for the Oilers, who are 21-1-0 when scoring first this season. The NHL record to begin a season is 22-0-0 by the 1944-45 Montreal Canadiens. Mikko Koskinen stopped 23 shots and is 11-2-2 in his last 15 starts.

The Oilers hold the third and last playoff post in the Pacific Division with 75 points in 64 games. They also lost for the first time after leading after one period (19-1-0) and completed a back-to-back after losing in overtime at Colorado on Monday.

“Not our finest hour in that last six minutes,” Oilers coach Jay Woodcroft said, “but we have to learn from it and move on.” Woodcroft attributed late individual errors to fatigue “but that’s no excuse.”

Hintz sped toward the net to tie the score 3-all at 14:38 of the third period.

“Roope was coming at a hundred miles an hour, and good luck trying to stop him when he’s going like that,” Bowness said.

Kane converted a rebound at 6:14 of the third period following a Connor McDavid breakaway, tying the score 2-all. At 6:57, Draisaitl scored on a rush to put Edmonton back ahead 3-2 with his 42nd goal of the season, second-most in the league.

Yamamoto deflected Evan Bouchard’s shot from just inside the blue line through traffic for the game’s first goal at 16:31 of the first period.

Robertson tied the score 1-1 at 6:37 of the second period with a wrister that beat Koskinen on the short side. Pavelski put Dallas ahead 16 seconds into a power play at 7:57 of the period by tipping home a rebound following a shot from the right circle by John Klingberg that bounced off Koskinen’s right shoulder.

Robertson, Pavelski, Hintz and Seguin each had a goal and an assist. Klingberg and Jamie Benn had two assists each for Dallas.

McDavid had two assists for Edmonton, giving him a league-leading 93 points.

Oettinger is 12-6-1 in starting 19 of Dallas’ last 21 games with Braden Holtby sidelined with a lower body injury. The last time a Stars goalie made 19 starts in 21 games was 2014-15 by Kari Lehtonen.

Oilers: At San Jose on Thursday.

Stars: At Carolina on Thursday.