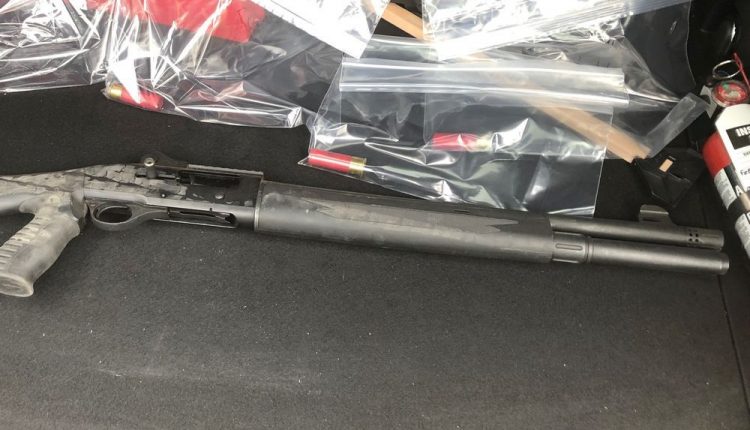 Semi-automatic shotgun and ammunition recovered from the scene of a non-fatal shootout by an EPS officer on June 5, 2021. jpg

A semi-automatic shotgun was recovered from the scene of a shooting west of Edmonton that set off an emergency alert on Saturday, the Alberta police watch dog said Tuesday.

The Alberta Serious Incident Response Team (ASIRT) was instructed on Saturday to investigate the circumstances in which an Edmonton police officer exchanged fire with a man after chasing a vehicle with a stolen trailer, resulting in a non-life-threatening gunshot wound Man led.

In a press release, shortly after noon on Saturday, ASIRT said Edmonton police had responded to a report of a stolen trailer at 218 Street and Stony Plain Road. An officer in a tagged police vehicle tried to stop a silver Ford Escape that was pulling an older trailer.

The officer in the marked police vehicle drove in front of the Ford to stop or slow it down. ASIRT said the driver of the Ford hit the back of the police vehicle and was traveling west on the east-facing lanes of Highway 16A. The police stopped the persecution.

However, a lone officer in an unmarked police vehicle began tracking the Ford from a distance and further assistance was sought from Edmonton Police and RCMP. The unmarked vehicle was following the Ford onto Highway 628 when the Ford stopped between Highway 60 and Range Road 264 and a man with a semi-automatic shotgun exited the vehicle.

The officer and the man exchanged shots, and then the man left the shotgun on the road, returned to the Ford, and continued west on Highway 628.

The man then lost control of the Ford on the dirt road. It rolled through a ditch and came to a stop in a stand of trees. The two men fled on foot, and Edmonton Police held the area.

A semi-automatic shotgun and shotgun shells, including evidence of an spent shotgun shell, were found in the area where the shots were suspected and confiscated as exhibits.

ASIRT will investigate the circumstances surrounding the release of the police officer’s firearm.

“No person might get close to this canine”: Elusa eluded rescuers north of Edmonton for nearly a month