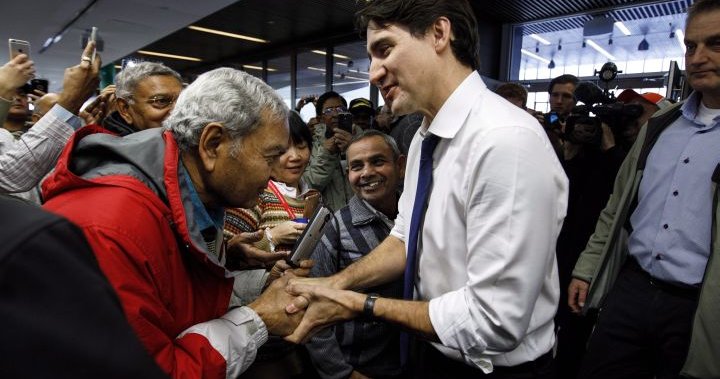 Prime Minister Justin Trudeau is in Edmonton, with a number of stops planned before his big town hall Thursday night.

Trudeau’s day started at the Mill Woods Seniors Centre, where a large crowd had gathered.

Trudeau took part in a game of pickle ball, and met a number of people in attendance.

Prime Minister Justin Trudeau takes part in a game of pickle ball at the Mill Woods Seniors Center during his visit to Edmonton on Feb. 1, 2018.

The media has been told Trudeau won’t take questions before the town hall event Thursday evening, but he made a quick appearance on the Ryan Jespersen Show on 630 CHED earlier in the day.

During the interview, he pledged support for the Trans Mountain pipeline.

“That pipeline is going to get built.”

Watch below: Prime Minister Justin Trudeau’s latest town hall tour has brought tough questions from Canadians in different cities and that trend is expected to continue when he speaks to Edmontonians on Thursday night. Vinesh Pratap reports.

On Wednesday, Alberta Premier Rachel Notley vowed retaliation after BC proposed banning the expansion of oil imports unless shippers prove they can clean up spills. That poses a great threat to Alberta’s recovering economy.

Trudeau said the situation between British Columbia and Alberta is one that may require federal intervention.

“Provinces have differences of opinion and different approaches all the time, and one of the reasons we have a national government to oversee national interests is to step up for the interests of all Canadians, and that’s exactly what I’m going to do.”

Trudeau added it’s important to get Alberta oil to foreign markets with what he calls “responsible projects like the Trans Mountain.”

“We can’t be simply trapped in the American market. That’s why getting this pipeline built, which has been wanted for a long time, is something that this government is serious about.”

BC gears up for potential legal battle with Alberta over pipelines

Trudeau added the federal regulatory process already addressed the issues that BC is concerned about.

“We were assured, and we did the science and we did the research, the Kinder Morgan pipeline is not a danger to the BC coast,” he said. “Particularly not, given the billions of dollars we’ve invested in the Oceans Protection Plan.”

Trudeau will also visit the Tawa Park Drainage Improvements before the 7 pm town hall. There, he will field questions from Edmontonians. For more details, including how to attend, click here.

Watch: The prime minister is expected to take some tough questions at the Edmonton stop of his cross country town hall meetings. But first, Justin Trudeau made a couple of stops around the city. Julia Wong reports live from one of his events.