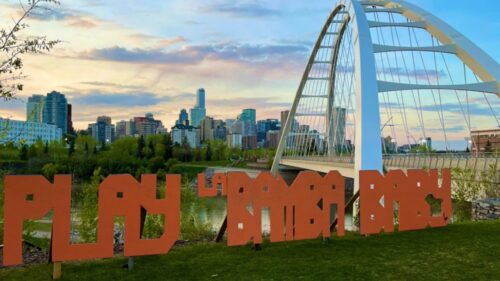 Edmonton is full of Oilers playoff fever as the Battle of Alberta rolls on, and a new “Play La Bamba Baby” sign has popped up near the Walterdale Bridge.

Ritchie Valen’s “La Bamba” was the late Joey Moss’ favorite song and has since been adopted as the Oilers’ victory anthem during playoffs.

The song has also taken on a new meaning during this year’s Oilers playoff run thanks to five-year-old Ben Stelter, who has a type of brain cancer known as glioblastoma and has become an absolute fixture for the city.

After every win, Stelter’s dad posts a video of him saying, “Play ‘La Bamba,’ baby!” and has become a favorite term among Oilers fans this playoff season.

Massive Oilers letters have popped up across the city during the playoff run, including Leon Draisaitl’s 29, Connor McDavid’s 97, and Kailer Yamamoto’s 56.