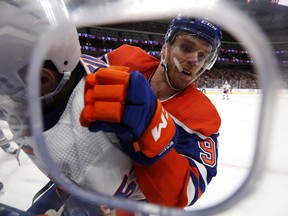 It’s odd how neatly the Edmonton Oilers’ 2022-23 season can be compartmentalized into the 10-game segments we’ve been analyzing for many years here at the Cult of Hockey. In any “normal” season, streaks and slumps can begin and end at anytime, Game 9 or 12 or 38 or what have you. But so far this year, it’s as if our arbitrary threshold and real-world results have achieved an odd sort of resonance, with the team’s fortunes rising and falling like the tide with each fresh set of 10 games.

In particular, the team’s short-term future seems to have been defined by the single match that started each segment, which in each case featured a dramatic in-game comeback.

The next issue of Edmonton Journal Headline News will soon be in your inbox.

A newbie fan inexperienced in the ways of the Bettman Point might conclude about the most recent segment, “well that’s 50%, that’ll keep them on track, yes?”

(*The mean figure actually fluctuates from one day to the next, standing at .554383 entering play on Friday. In broad brush terms, about 22% of all games generate a third point. A very far cry from the reliable old mean of .500000 back in the days when all games were worth the same.)

The imbalance holds true even in the short term; on that night that the Oilers took “half a loaf” with 1 point against St. Louis, that wildcard rival took the full 2 points available to them and gained a point on the Oilers. Days later, Nashville Predators made a similar incremental gain with an OT win over the Oil.

All of which leads us to the current (as of Friday morning) status of the Western Conference standings: 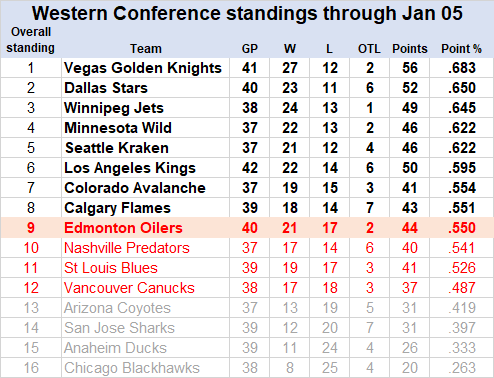 Only eight teams (bold font) will make the post season, leaving Edmonton and their .550 points percentage barely on the wrong side of the playoff cut line, for now. They and 3 other playoff contenders (charitably including Vancouver Canucks) are shown in red font. The rest are no-hopers and are greyed out, our equivalent of a “mercy pull”.

Now let’s look at the same group for the last 10 GP: 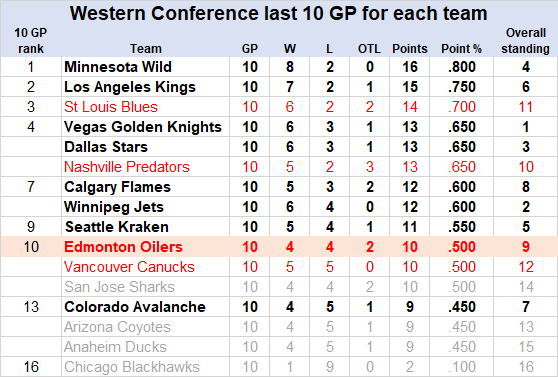 Same emphasis as above. The Oilers and their .500 percentage over the last 10 are not treading water, they’re taking it on. They lost ground to 9 conference rivals, 7 of whom currently stand in playoff positions, the other 2 being wild card rivals. Note how all 9 of those teams won at least half their games. Edmonton with its 4 wins and 2 Bettmans managed to gain a single point on a single playoff rival: Colorado Avalanche, by coincidence Saturday night’s visitors to Rogers Place.

Season to date by segment

After a roller coaster in the first 3 segments, each featuring a goal differential of at least +/- 9 goals, the fourth did indeed level off at just +2 in that crucial department. So too did PDO (shooting plus save percentage combined) which stood within a percent of break-even after significant fluctuations earlier in the season. A sliver of good news is a continuing improvement in shot shares.

Another is the improvement in Grade A shots, as measured by our own analysis here at the Cult of Hockey. Over the past 10 games the Oil generated 144 Grade A shots in all situations while holding their opponents to 116. In the higher danger 5 alarm shots, it was 80-62 Edmonton. With such fine underlying numbers for the most dangerous shots, it’s reasonable to expect the team’s PDO to climb over and above the 1.000 threshold, as we have seen at other times in Jay Woodcroft’s tenure when the team is rolling. Do that on a regular basis and they will string a few wins together.

Turning to the individual side, Stuart Skinner continues to be the #1 man for now, starting 7 of the 10 games, posting a .500 points percentage of his own with a save percentage bang on .900.

Since Christmas, Jack Campbell is starting to show some positive signs, especially a sparkling 2.36 goals against average, though that is largely predicated by stronger defensive play in front of him. He’s faced just 17, 3 (in 23 minutes) and 22 shots in his last 3 appearances.

Tyson Barrie continues to lead the way on the offensive side, though it’s worth noting that 5 of his 7 points were powerplay assists. Darnell Nurse meanwhile recorded all 4 of his points at 5v5, while leading the d-corps in a variety of categories across the statistical spectrum.

The rest of the d-corps had its struggles offensively, producing 0 goals and just 5 assists among the 4 of them. 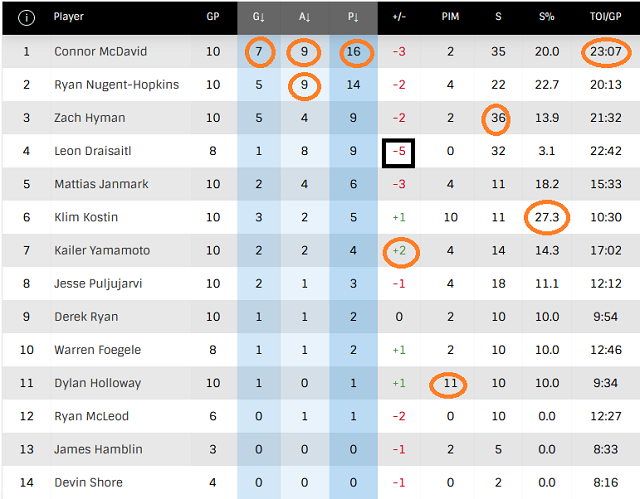 No surprise to see Connor McDavid at the top of this list, but a very pleasant one to see a red hot Ryan Nugent-Hopkins stepping up with an outstanding 14-point segment.

Leon Draisaitl meanwhile took a step back, missing 2 games to injury which was whispered to have hampered him for several more. As a group, the top 4 is comprised of the usual suspects, though it’s worth noting that each of the four scored more than half his points (McDavid 9, RNH 8, Draisaitl 6, Zach Hyman 6) on Edmonton’s devastating powerplay. None was especially productive at even-strength, a fact that is underscored by a string of red numbers in the plus/minus column for that group. Looking ahead, it is essential that the Oilers find a way to improve their 5v5 outcomes.

Some decent intermediate scoring from the role players, with 4 forwards outside the top group scoring at least 2 goals apiece. Most pleasant surprises among them from a scoring perspective being Mattias Janmark and Klim Kostin.

We close in our usual fashion by reviewing the set of 10 games through the lens of our own subjective ratings here at the  Cult of Hockey. Regular readers will know that we grade on a scale of 1 to 10, the performance of every Edmonton Oilers player in every game the team plays, based on a combination of observation and interpretation of statistical output. Here are average grades for Games 31-40 along with our customary thumbnail comment summarizing each player’s contribution over that span: 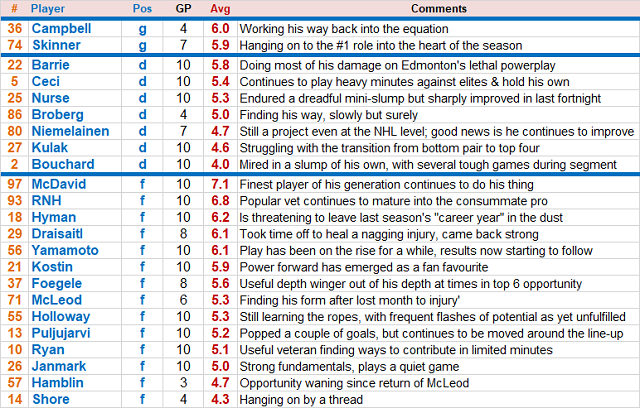 McCURDY: A tough calendar year for Jack Campbell, and not just in Edmonton

Postmedia is committed to maintaining a lively but civil forum for discussion and encourage all readers to share their views on our articles. Comments may take up to an hour for moderation before appearing on the site. We ask you to keep your comments relevant and respectful. We have enabled email notifications—you will now receive an email if you receive a reply to your comment, there is an update to a comment thread you follow or if a user you follow comments. Visit our Community Guidelines for more information and details on how to adjust your email settings.

Test it Out Edmonton: A cool Filipino dinner collection kicks off January 11