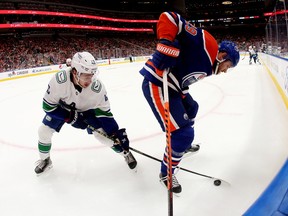 The Edmonton Oilers got down by three goals in this game, but scored the next five to win their home-opener against the Vancouver Canucks.

Oilers fans have seen this move before with Edmonton often getting down a few goals last season before storming back. It’s almost expected now, which maybe shouldn’t be such a surprise given the team has such stars as Connor McDavid and Leon Draisaitl, plus an ever-improving supporting cast.

Overall, Edmonton has just 25 shots to 36 for Vancouver, but Edmonton had the slightly more dangerous shots, 18 Grade A shots to 15 for Vancouver, with each team have ten of the most dangerous 5-alarm shots (which go in more than 30 per cent of the time). Here’s the running count.

Evander Kane, 7. He led the Oil with eight hits, and one of them was crucial to the outcome. His nasty and unpenalized high stick on Quinn Hughes led to Edmonton’s first goal. I know it was a nasty play but as an Oilers fan, how can I hate it? The play might well have been the game’s turning point. He battled to win the puck in the third, then went to the net and almost snapped home a big goal in the third. He got hit with a cheap penalty for bumping Demko late in the game while trying to score a goal, but maybe we shouldn’t complain, given his hammering of Hughes. He made a fine and unselfish back pass to McD to set up the hat trick goal into the empty net.

Connor McDavid, 8. Three goals, one assist, eight major contributions to Grade A shots, and he didn’t really reach top gear this game. He played 23:36, with the oil down one forward. He had a quiet first period but came alive in the second with an assist and a goal, finishing off the table top hockey passing play with a one-timer finish on the power play. He set up Ceci with a low-high feed into the slot for a one-time shot early in the third. He took Hyman’s pass and pounded two slot shots on net late in the third to score Edmonton’s fourth goal.

Jesse Puljujarvi, 6. Solid effort, but just 12:59 of ice time in a game full of penalties. Moved into the slot in the first to take an Hyman pass and slam it on net, but Demko thwarted JP’s 5-alarm shot. A moment later he made a n-zone turnover leading to a 3-on-1 that almost game Vancouver a three-zilch lead. He popped the puck on the forecheck, leading to a Hyman jam shot. Thew a hard hit on the forecheck in the second.

Dylan Holloway, 4. Welcome to the NHL, kid! Rancid own-zone turnover, leading to Elias Pettersson deking goalie Jack Campbell for the game’s first goal. He got bumped down the line-up pronto. He played just 7:41. But showed a cool head to hold the puck and set up Ryan Murray’s great slot shot in the second.

Leon Draisaitl, 8. A goal and two assists. His turnover in the o-zone kicked off the Sequence of Pain on Vancouver’s second goal. He snapped in Edmonton’s first goal on a power play scramble. Along with RNH and Hyman, he was part of the brilliant passing play leading to McD’s second period power play goal. He made a cool and deadly feed to set up Nurse and tie the game late in the second. He came out of the penalty box in the third to set up Kane on a 5-alarm shot.

Zach Hyman, 8. The Oil’s best player of the night. Two assists. He made the Oil’s first good play of the game, diving on the PK to swipe a puck out of Edmonton’s end. A moment later he stole the puck in the o-zone and got off Edmonton’s first Grade A shot of the season, with the play then progressing to Hyman setting up JP’s first 5-alarm shot. Got a good jam shot late in the first. Great quick pass into the slot to Draisaitl on McD’s first goal of the year. Some great work on McD’s second goal, winning the puck in the d-zone, battling it up the ice and setting up McD.

Ryan McLeod, 6. His bad line change shorthanded contributed to Pearson’s Grade A power play shot in the first. But played 16:19 and generally got his job done, with 4:43 of that on the PK.

Ryan Nugent Hopkins, 7. He played 5:31 on the PK, the most of any forward, and was generally effective. One of the Fab Four on Edmonton’s exceptionally good passing play on McD’s goal in the second. He won 13 out of 25 face offs.

Derek Ryan, 5. He made a fine feed late in the second on a Bouchard one-timer. His hustle on the PK paid off in the third as he drew a penalty charging for the puck.

Darnell Nurse, 7th He led the Oilers in ice, playing 26:19. Not his best game, but plenty to like in the end. He was caught up-ice on Vancouver’s second goal. He took a bad penalty at the end of the first. running a canuck on a late hit in the o-zone; Vancouver scored on the power play. Ouch! I have to dock him a full mark for that. He allowed a pass into the slot for Horvat’s Grade A in the second. Made up for previous mistakes, popping the puck on the PK, then charging up ice to harpoon Drai’s brilliant horizontal stab of a pass into the net. Fired off a dangerous back-hander early in the third, then slid to break-up a Vancouver 2-on-1 break.

Cody Ceci, 7. Led the team in PK ice 6:49, but was solid in all situations, just as he was last year. Got off a wicked one-timer early in the third.

Brett Kulak, 6. He was skating and moving the puck well. He was caught on Vancouver’s third goal, failing to cover off Kuzmenko.

Tyson Barrie, 5. Quiet game for Barrie. He and Ryan got beat clean on Miller’s power play breakaway late in the second.

Ryan Murray, 7. He kept a clean sheet, not one major mistake on a Grade A shot against at even strength, the only Oilers d-man to do so. He got beat in the slot by Curtis Lazar in the first, but Lazar shot wide as Murray hacked him. He made a thrilling through the legs deke to gain the slot and launch a danger shot in the second. He made a fine pass to kick off a great Oilers rush late in the second. As the game went along, his play picked up, as did that of his partner Bouchard.

Evan Bouchard, 6. He made some fine passes this game. He caught got in a tough spot after Holloway’s turnover on Van’s first goal, then coughed up the puck a moment later leading to a Grade A Vancouver crease shot. He got beat on a breakaway pass to Pearson early in the second, then broke in for a 5-alarm shot of his own a moment later. Fired off a wicked slot harpoon late in the second off a Ryan pass.

Jack Campbell, 8. Good game in his debut. Not perfect, a few iffy plays, but lots of big saves. The first goal against was a tough play to stop but should he not have done better with JT Miller’s shot? That’s how I saw it. He made many big saves, though, as the Oilers fought back into the game, including stoning Pettersson as he charged on net on the power play. Great stop on Kuzmenko breakaway, then Pearson’s break-in stab, both in the first. Stopped Pearson again on a breakaway early in the second and stopped Miller’s breakaway late in the same frame. He came out of his net to play the puck and thwart a potential breakaway in the third.

David Staples: Danielle Smith is her own greatest asset, but also her own worst enemy 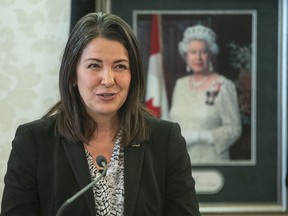 Danielle Smith speaks after being sworn in as Alberta Premier-designate in Edmonton on Tuesday October 11, 2022. THE CANADIAN PRESS/Jason Franson

At the Cult of Hockey

McCURDY: Reflections on 50 years as an Oilers fan

STAPLES: Not all NHL analysts are high on Oilers’ chances

Sporting Life is opening a large retailer in Edmonton this weekend