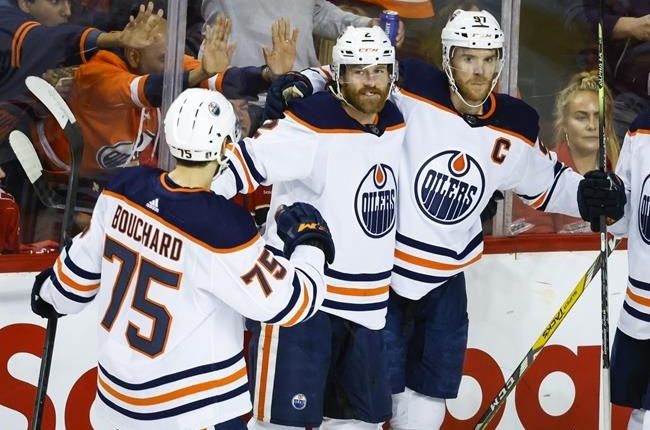 CALGARY — Duncan Keith had been here before.

Well, maybe not right here — breaking down a wild 9-6 loss to open the Oilers’ second-round playoff series against their bitter provincial rival — but the veteran defenseman’s eyes have witnessed pretty much everything imaginable over his 17 NHL seasons.

The morning of Game 2, and with his team already wobbling against a physical, grinding opponent, Keith cut a calm figure at the microphone deep in the bowels of Scotiabank Saddledome.

“We’ve got a fairly good understanding that it’s one game, it’s early in the series,” said the 38-year-old.

“But we need to have a response.”

Keith was a huge part of Edmonton’s solution against Calgary’s relentless, high-pressure forecheck on Friday night. He also chipped in with a goal and two assists as the Oilers rebounded from another early deficit to down the Flames 5-3 and even the first post-season Battle of Alberta in 31 years 1-1.

The virtuoso showing represented the Winnipeg native’s first three-point playoff performance since May 2015 when he was in the process of winning a third Stanley Cup with the Chicago Blackhawks.

Keith, in no uncertain terms, wound the clock back in Game 2.

“Just unfazed,” Oilers winger Zach Hyman said. “Somebody’s who’s seen it all, has done it all.”

“Such a veteran presence back there, such a big voice in the room,” added Edmonton captain Connor McDavid, the beneficiary of a slick Keith feed to spark the comeback while down 3-1 in the second period. “He’s been great for us.”

The move to acquire Keith and his US$5.5-million salary cap hit by Oilers general manager Ken Holland last summer was, however, widely panned following the trade with Chicago.

Critics pointed out the 2015 Conn Smythe Trophy winner was past his prime, and that taking on the full wage bill was an unnecessary move for a team pressed perilously tight to the cap.

Keith had one goal and 20 assists over 64 regular-season games in 2021-22, but Edmonton interim head coach Jay Woodcroft said the blue-liner’s value can’t simply be measured on the stat sheet.

“His presence comes through in big moments,” he said. “Sometimes it’s something as simple as going by the bench during a TV timeout and just saying, ‘Hey, we got this. Take a deep breath and we’re good to go here.’

“Sometimes it’s making the big play at the right moment.”

One of those came in Friday’s first period when he took a one-handed McDavid offering and fired his first playoff goal since 2016 past Jacob Markstrom. Another arrived in the second with the teams playing four-on-four when he feathered that pass to a streaking McDavid, setting the table for another audacious highlight-reel finish by the superstar centre.

Keith then assisted on Evan Bouchard’s power-play blast that tied it at three before the Oilers scored twice in the third to head home all even with Game 3 set for Sunday at Rogers Place.

But his cool, under-the-radar approach to the defensive zone was equally important after the Flames had their way with the Oilers for long stretches of a Game 1 that saw Calgary build leads of 3-0, 5-1 and 6-2 . Edmonton broke the puck out much better Friday, with Keith playing a big role in relieving pressure with a smart, measured approach.

“I can’t say enough about Duncs,” Woodcroft said. “His resume is Hall of Fame-worthy. He’ll be there one day, but in terms of his ability to pass on his experiences to our group, can’t say enough.”

Hyman said apart from the contributions between whistles, Keith was tabbed to help with the nerves of a talented group that’s stumbled under past bright lights, including a stunning first-round sweep last spring at the hands of the Winnipeg Jets.

“He’s a guy that was brought in to calm the group in times when things aren’t going well,” Hyman said. “A big voice in that locker room at settling us down.

Both on and off the ice.

This report by The Canadian Press was first published May 21, 2022.

Gretzky vs. Ovechkin: Superstars battle it out on NHL 20 for Edmonton’s Meals Financial institution