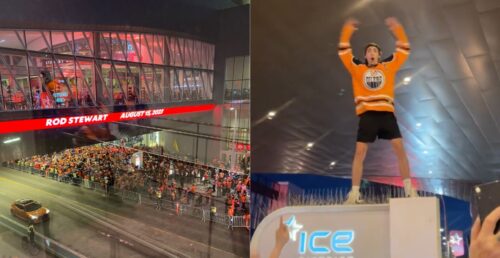 Another Battle of Alberta at Rogers Place, another win for the Oilers, and another night of fans going hard in the streets to celebrate. We love to see it!

Fans piled out of Rogers Place after a 5-3 win in Game 4 of the second-round Stanley Cup Playoff series, taking to the streets to enjoy the dominating win that led to a 3-1 series edge.

We have, along with others, started to notice Calgary’s Red Lot hasn’t been drawing as many crowds, we wonder why!

Watch to the end… The last guy is my hero! 😂 #letsgooilers pic.twitter.com/vtZuMHVbW2

No fans went as far as to ride the Stanley Cup attached to the Wayne Gretzky statue just feet from the doors of Rogers Place — that iconic statue was cordoned off due to events from Sunday’s post-game activities.