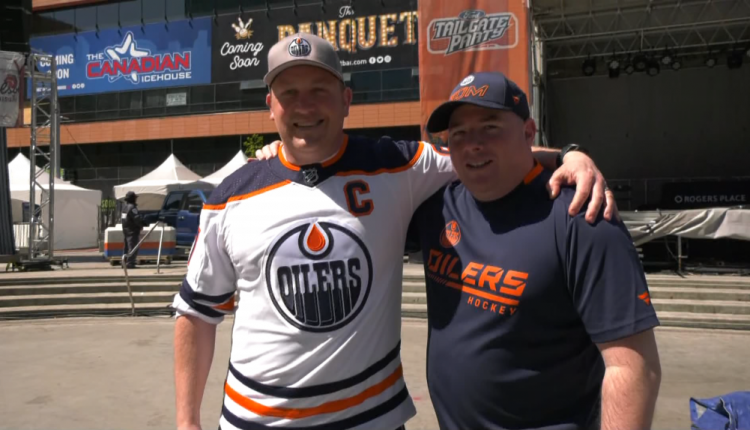 Landing in oil country during the Oilers’ best playoff run in years has been an eye-opening, “raucous” experience for two international visitors.

This was the year Carl Briggs was finally able to visit his friend, who had begged him for years to take a trip to Canada.

“I rang him this year and said, ‘Look, I’m going to come and see you. Will I get to see hockey at some point?'” the Leicestershire, England, resident recalled.

The last week of May leading into June was the only time Briggs could swing a trip.

“He was like, ‘There’s going to be playoffs. Let’s hope for it. Fingers crossed.'”

Briggs watched – as much as he could during night shifts in the UK – as the Oilers’ cruised through the regular season and first round to face the Calgary Flames.

But the Edmonton team didn’t need seven games to put out the Flames, thanks to star Connor McDavid scoring the game-winning point in overtime on May 26 and killing any need for a Game 6 in Alberta’s capital city where Briggs was about to touch down.

He arrived in the throes of the Western Conference Final.

“I’ve never realized the hype. Bear in mind, the games haven’t been here this week. But we went to the watch party the other day, and I just sat there going, ‘This is insane.’ People are effectively watching a TV in a stadium and it’s raucous,” Briggs laughed, speaking to CTV News Edmonton on Friday, ahead of Edmonton’s third game against Colorado.

“We were in the flat the other day, and I was like, ‘What’s that noise? Something going on out there?’ And he said, ‘Welcome to Oiler country.’ Just people banging the horns non stop on the cars going by the stadium.”

The former rugby player went so far as to call hockey “the pinnacle of sport.”

“It has everything. It has the razzmatazz of the noise, the glamour, the hits, the scale of these guys, as well, and the pace.”

His awe is not unlike Jonathan Whitelaw’s. The Scot and his family are living in Edmonton for the summer before moving to northern Alberta where his wife will work as a doctor.

Fans of North American sports naturally, the couple “totally immersed” themselves in Oilers culture, and prepared for the move by watching All or Nothing: Toronto Maple Leafs, which their favorite player Zach Hyman was featured in.

“I know that’s terrible to say wearing an Oilers jersey, but … he featured very very prominently in that. So when we learned that he’d been picked up in the off season, we followed his progress. And he’s had a great playoff run , as well,” Whitelaw told CTV.

Jonathan Whitelaw and his family are living in Edmonton for the summer before moving to northern Alberta, and landed in the city in the middle of NHL playoffs.

“It felt almost like he followed us to Edmonton. Maybe, we followed him, actually.”

It’s not the only coincidence that has made the journalist and author feel more connected to the city; the cover of his last book, published in April, was orange and blue.

“It was written in the stars, I think,” he smiled.

Both he and the Englishman only spoke favorably of the fevered fans in Alberta’s capital city.

“We’ve been made to feel so welcome. Not just by Oilers fans, right enough, but by the whole city. The whole city’s made us feel really really welcome. I was retweeted by the mayor the other day, which, again, I don’t think that’s ever happened to me,” Whitelaw said.

So caught up in the excitement of finals, and so close to seeing a live game, Briggs even decided at the last minute to stay for Game 3 in Edmonton against Colorado.

“I haven’t told my wife yet,” he said Friday, smirking.

“I’m hoping she’ll be OK. I might have to stay a bit longer if not.”