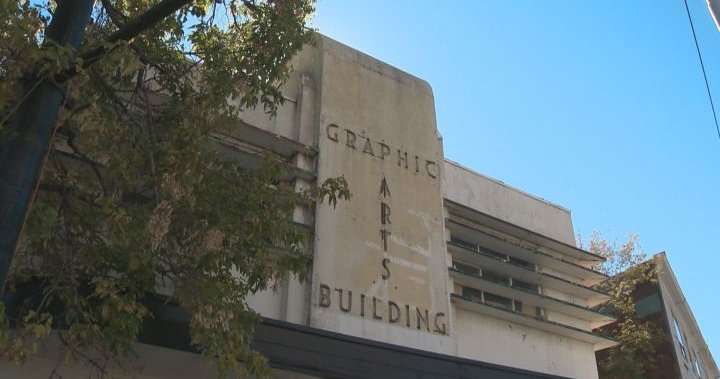 EDMONTON – Local musicians have teamed up in hopes of saving two buildings in central Edmonton that are due to be demolished to make way for the Valley Line LRT to be built.

The Mitchell and Reed Auction House (The Artery) used to be a hotbed of independent culture, local musician Darren Radbourne said on Sunday. But it’s been vacant since it and the Graphics Arts Building, both at 95 Street and Jasper Avenue, were acquired by the city in March. The land on which the buildings stand is to be used as construction site for the Valley Line LRT project.

“As a musician, I played my first show at The Artery. I got my first tattoo at The Graphic Arts Building when I was 19, ”said Radbourne. “They really created a magnet for artists in town, independent artists in town and out of town as well. They have made a name for themselves nationwide as touring acts.

“I think getting rid of these buildings in the hope that future development will come in here and be built … I think you’re eliminating those opportunities at the grassroots level and almost adjusting to a stale, beige-colored environment.”

The Artery building, built in 1908, is the only surviving building on Jasper Avenue, which is an example of the boomtown commercial development that once lined the south side of the street. Although it is listed as a historical resource on the city’s historical resource inventory, it has never been recorded.

The graphic arts building was built in 1938 and is not on the historical resource inventory. It is still used as a music venue, but all tenants must be gone by the end of the year.

“I think these resources have value beyond monetary values, and it’s one of those indescribable things that I don’t really think we really consider when trying to create a business case for this type of development,” said Radbourne.

Ward 6 councilor Scott McKeen had similar concerns about the demolition of the art venues and asked the city council to investigate the historical significance of the buildings and see if it was the city’s responsibility to preserve them.

“We obviously don’t have a great record of heritage preservation,” he said. “These decisions are difficult for the council and it is difficult to make everyone happy, but I want to see if we can work to preserve it and also balance the needs of LRT and the future growth of Edmonton.”

McKeen believes that having a vibrant music scene is important in creating a livelier city. The city’s Live Music Initiative aims to create more live music venues to keep musicians in Edmonton.

“We have a lot of talented musicians in Edmonton and I think we really have to do everything we can to make the music scene better,” he said. “The idea there is to try to create more live music venues and allow our musicians to make a living in Edmonton so they don’t have to go to Toronto or Montreal so early in their careers.”

A report released late last week addressed his concerns, but McKeen says he still has questions. The topic will be discussed in the board meeting on Tuesday.

“I think it’s important that we honor our history and not just tear down those chapters in our history without thought and debate, if you will,” McKeen said. “I would like to ask whether this area is critical for the lying surface or not.”

“The question is whether or not this is a multi-million dollar decision. And it could be. “

Radbourne will speak at Tuesday’s meeting. He thinks the buildings are worth fighting for.

“They really created a magnet for artists in town, independent artists in town and out of town as well. They have made a name for themselves as touring acts nationwide, ”he said. “I think that such cultural institutions can really help to win people over to a community.”

For more information on the project and to read the report, please visit the City of Edmonton website.