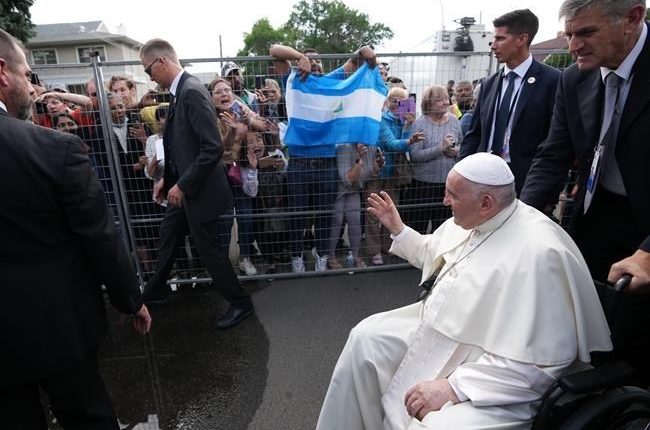 EDMONTON — The Pope’s large public mass in Edmonton has been called a missed opportunity after the pontiff focused his message on grandparents, despite delivering an apology a day earlier for abuses at Catholic-run residential schools.

“I just don’t know what they were thinking,” said Daryold Corbiere Winkler, a priest in Ottawa who is Anishinaabe.

“For me, this is a missed opportunity for a mass to celebrate Indigenous traditions and cultural practices. They just didn’t. They did the opposite.”

Corbiere Winkler said he was optimistic when the Tuesday mass started with Indigenous drumming, as the popemobile transported Pope Francis through Commonwealth Stadium. The Pope blessed and kissed babies and young children who were handed to him and cheers echoed from the stands with thousands of people.

Corbiere Winkler said his hopes were dashed as the service took a traditional turn. He was devastated when the Eucharistic prayer was delivered in Latin, considering residential school survivors were there.

“That’s the language they would have heard in residential school,” he said. “A lot of survivors, that’s the mass they heard when they were children.”

Angel Dermit said the rigid mass reminded her of church ceremonies from when she was a child at the Lower Post Residential School in British Columbia.

Several indigenous people participated in the program. However, Francis did not address Indigenous Peoples, cultures or traditions much during the event.

The Pope focused his homily, the comments following Scripture readings, on the importance of grandparents and the elderly.

Near the end, Francis prayed for “a future in which the history of violence and marginalization suffered by our Indigenous brothers and sisters is never repeated.”

“Young and old, grandparents and grandchildren, all together. Let us move forward together, and together, let us dream.”

About 65,000 free tickets were available for the mass but many rows of seats were empty, particularly in the upper decks. Organizers estimated there were about 50,000 in attendance. Hats and clothing commemorating the papal visit were sold near an entrance for between $10 and $45.

During the blessing of the Eucharist, a person yelled “repeal the doctrine of discovery” — papal documents used in colonization.

Near the end of the mass, Edmonton Archbishop Richard Smith thanked Francis for fulfilling his promise “to come to Canada and thereby demonstrate your closeness to us all, especially to the First Nations, Métis and Inuit Peoples of this land.”

Rose-Marie Blair-Isberg traveled from Yukon to attend. The residential school survivor from White River First Nation, who is Catholic, said it felt like the church was “selling their point of view” during the mass.

Edith Didzena held a photo of her mother, Regina Etthidzine, as she sat in the stadium with her children. Didzena, who lives in Bushe River on the Dene Tha’ First Nation in Alberta, said her mother went to residential school but died before she could hear the Pope’s apology.

On Monday, during a visit to the community of Maskwacis, south of Edmonton, the Pope apologized to residential school survivors and their families for the role members of the church played in the cultural destruction and forced assimilation of Indigenous Peoples.

Patty Crofton, a member of Sagkeeng First Nation in Manitoba, said she did not sleep well after hearing the apology because it brought back difficult memories. She went to day school and her parents went to residential schools.

“I am on my own healing journey from all of this,” she said before the mass.

Organizers have said not holding a mass until the second full day of the papal visit is noteworthy, as Francis wanted to demonstrate his priority was to first address the legacy of residential schools on Indigenous lands.

Later in the day, Francis traveled to Lac Ste. Anne, northwest of Edmonton, to take part in the community’s annual pilgrimage, which regularly welcomes tens of thousands of indigenous participants.

Métis Nation of Alberta President Audrey Poitras said she was honored to welcome Francis to the site, which is considered sacred. But, Poitras said, words and apologies are not enough.

“We hope that by feeling the spirit of the Métis, connected so deeply with a place so sacred to the church, this will lead to real actions and accountability, so that we as a people may focus on healing,” she said in a statement .

Later in the week, Francis is to travel to Quebec City for meetings with Indigenous Peoples and to host another mass. He is also to travel to Iqaluit.

The Indian Residential Schools Resolution Health Support Program has a hotline to help residential school survivors and their relatives suffering trauma invoked by the recall of past abuse. The number is 1-866-925-4419.

— With files from Kelly Geraldine Malone in Winnipeg