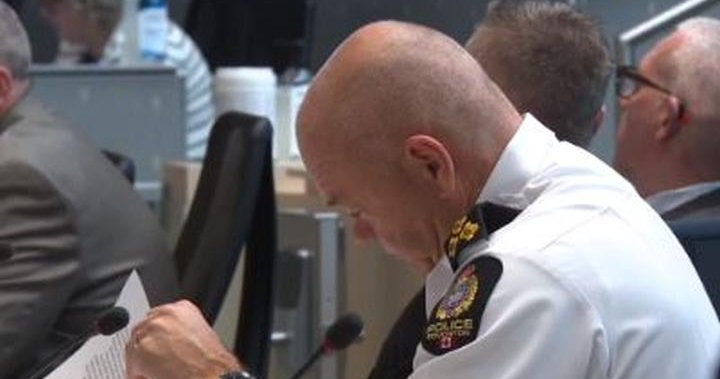 After two days of debate, Edmonton City Councilors on Friday approved an increase in funding for the police service.

The decision came as part of a debate about a new funding formula for the service. The old one was discarded in 2020 when the Defund The Police movement began and spending was reviewed.

The Council then asked for a budget review and a funding formula designed to ensure clarity and coherence going forward.

But the decision made on Friday does not provide for either.

Ultimately, they approved the formula and the subsequent increase in funds, although Sohi and council members Michael Janz, Jo-Anne Wright and Ashley Salvador voted against.

But the council also agreed to claim funding only for 2023 and to hold the debate again in the spring.

5:43
The Edmonton criminologist weighs the funding of the city’s police force

Meanwhile, city officials have been tasked with making several potential changes to the funding formula, including an option to cut the budget.

“We can’t keep going back and forth,” a visibly frustrated EPS chief Dale McFee told reporters on Friday.

“It is our citizens who are demanding more services, they want more visibility. But at some point it’s also an investment,” he said.

McFee said it’s too early to say what changes the service will need to make in response to the council’s decision.

While councilors originally requested the funding formula, on Friday they seemed divided on whether they actually wanted one.

“I would prefer that we have a full conversation each year about how we are doing in relation to the police and have the opportunity to adjust the budget accordingly,” Ward Papastew councilor Janz said on Friday.

“(It) encourages predictability and, at least in the past, expectation too. And that was: “You have to work with that. Work with it,” explained Ward Pihêsiwin’s representative.

The boss said he just wanted to know how much money the police department would have to work with in the future.

“We spend more time on that and less time on the actual security component of our work.”

1:36
City councilors are considering a new funding formula for the Edmonton Police Service