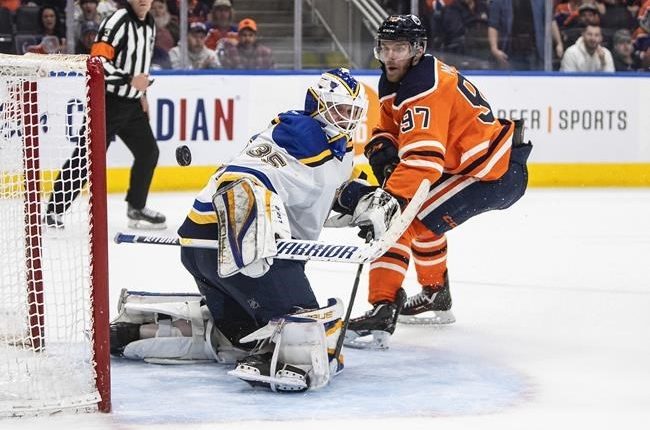 EDMONTON — Connor McDavid and the Edmonton Oilers certainly didn’t make it easy on themselves Friday night.

McDavid scored his second goal of the game 1:11 into overtime as Edmonton held on to win his third straight with a 6-5 victory over the St. Louis Blues.

Leon Draisaitl made a perfect saucer pass to allow McDavid to direct home the winner in the extra session and salvage the win for Edmonton, which led 4-1 after the first period and almost let the game get away.

“Leo is such an amazing player that he is going to get the puck over somehow and he ultimately did and I found a way to put it in,” McDavid said. “Ultimately we hung in there to get two points.

“It sounds cliché, but that’s really all that matters at the end of the day.”

Zach Hyman had two goals, Evander Kane had a goal and two assists and Darnell Nurse also scored for the Oilers (39-25-5) who tied a franchise record for most consecutive home wins with nine, outscoring opponents 47-24 during that stretch .

“I’m pleased we found a way to get the two points, that’s the goal heading into each and every night…it’s a results driven business, but there was some sloppy play that has to get cleaned up,” said Oilers head coach Jay Woodcroft. “Anytime you score six on a team like that, that’s a positive sign, but there’s some areas we have to focus on, like keeping them out of our net.”

Pavel Buchnevich scored twice and Robert Thomas, Brayden Schenn and Ivan Barbashev also had goals for the Blues (37-20-10) who had a two-game winning streak halted.

“They came out hard, but that was a good comeback by us, that’s big for our group, being down 4-1 and coming back like that and knowing that if we’re down, we can step up and get back in it, said Blues defenseman Colton Parayko.

Edmonton got on the board less than two minutes into a frantic start to the game after the Blues coughed up the puck and goalie Jordan Binnington overcommitted on Oilers forward Kailer Yamamoto. That allowed him to send the puck over to Hyman, who had a wide-open net.

Two-and-a-half minutes later, the Blues tied it up as Edmonton goalie Mike Smith got hung up at the side of the net and Buchnevich was untouched as he swung behind the cage before putting a wraparound into a wide-open net of his own.

Just 30 seconds after that, the Oilers responded as Hyman came out from behind the net, spun and shot home his second of the game and career-high 24th of the season.

Edmonton got a short-handed goal midway through the opening frame as Barbashev fanned on a puck in his own zone. Kane picked it up and scored his 16th goal in his 30th game as an Oiler.

The Oilers barrage continued a few minutes later as McDavid punched in his 38th from the blue paint, chasing Binnington – who allowed four goals on 12 shots – in favor of Ville Husso.

St. Louis got one back two minutes into the second as Thomas fought off a defender to knife a shot past Smith.

The Blues pulled to within one with four-and-a-half minutes left in the middle frame as Schenn sent a shot through Smith’s legs from distance.

Edmonton got a huge goal late in the second as Nurse picked up a rebound and lifted a backhand shot past Husso.

St. Louis got another ugly goal two minutes into the third as a deflected pass allowed Buchnevich to score his second of the game with the goalie going the other way.

The Blues tied the game eight-and-a-half minutes into the third as Barbashev scored on a deflection in tight to eventually send the game into overtime.

The Blues are back in action Saturday when they are in Calgary to face the Flames. The Oilers start a three-game California trip in Anaheim on Sunday.

Notes: The Blues were without leading scorer Jordan Kyrou, who missed his second straight game with an illness. Also out for St. Louis were Torey Krug (hand), Tyler Bozak (lower body) and Scott Perunovich (wrist)… The Oilers were only without Kris Russell, who is on COVID-19 protocol.

This report by The Canadian Press was first published April 1, 2022.