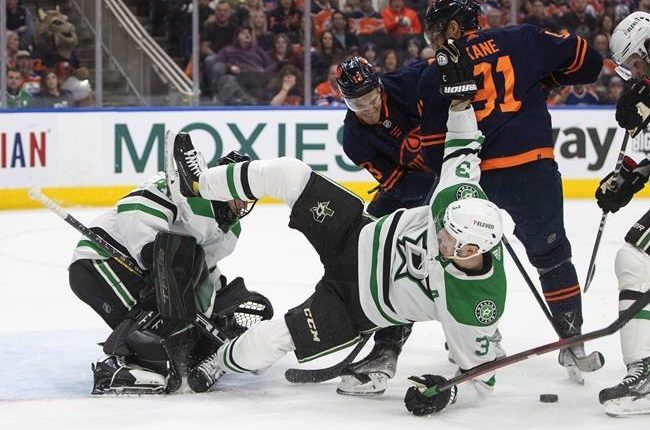 EDMONTON — The Edmonton Oilers are on the cusp of clinching a playoff spot.

Connor McDavid had a goal and two assists to move back into the league lead for points as the Oilers earned a 5-2 victory over the Dallas Stars on Wednesday night.

It’s all but a foregone conclusion the Oilers will clinch as they’re nine points up on both Vegas and Vancouver, who are tied for fourth in the Pacific Division with all three teams having five games to play.

“I think guys are confident right now,” McDavid said. “Up and down the lineup, guys feel good about their own game and feel good about our team game. There are a lot of good things happening right now and we have to keep at it.”

Evander Kane, Derek Ryan, Zach Hyman and Jesse Puljujarvi also scored for the Oilers (45-26-6), who have won three straight and improved to 11-0-1 in their last 12 home games.

“We’re building and improving and improving is fun,” said Oilers head coach Jay Woodcroft. “Our team is trending in the right direction, but as I’ve said the last couple of days, I don’t think we’ve played to our full potential yet.”

Jason Robertson and Roope Hintz replied for the Stars (43-29-5), who have lost three of their last four.

“It’s playoffs, they have already started for us, so it’s obviously disappointing because every game his huge for us,” Dallas forward Radek Faksa said. “We have to be tighter defensively and do what we have to, to keep the puck out of our net.”

The Oilers got off to a quick start with a goal just 3:12 into the opening frame as McDavid sped up the ice before sending a backhand pass from behind the goal line to Kane, who sent his 17th of the season past Dallas goalie Scott Wedgewood .

Edmonton extended its lead three minutes later as a Ryan McLeod shot caromed off the bar to Ryan, who scored his first goal in 21 games.

Dallas ended Edmonton goalie Mike Smith’s attempt to record a third consecutive shutout 11:39 into the first period. A bullet of a shot from Robertson hit the crossbar and went in for his 37th of the season.

The Stars pulled even five minutes into the second period as Hintz was able to poke in a puck that had been lying in the crease for his 35th.

Edmonton pulled back in front with seven minutes left in the second when Hyman directed a rebound backhand in for his career-best 25th of the campaign.

The Oilers made it 4-2 with two minutes to play in the second period. An Evan Bouchard shot ticked off of Puljujarvi on the way into the net, just his second goal in the last 16 games.

McDavid scored into an empty net to close out the game. It was his 43rd goal of the season.

The Stars will visit Calgary on Thursday. The Oilers welcome the Colorado Avalanche on Friday.

Notes: It was the third and final meeting between the two teams, with the Stars winning the first two contests, both played in Dallas. … At 37, Dallas forward Joe Pavelski is the oldest player to be leading his team in scoring. … Stars defenseman Esa Lindell returned to the lineup after missing the last game with an illness. The Stars were still without Vladislav Namestnikov (lower body). … Edmonton had its entire regular lineup available.

This report by The Canadian Press was first published April 20, 2022.

The last word information to boba and bubble tea in Edmonton