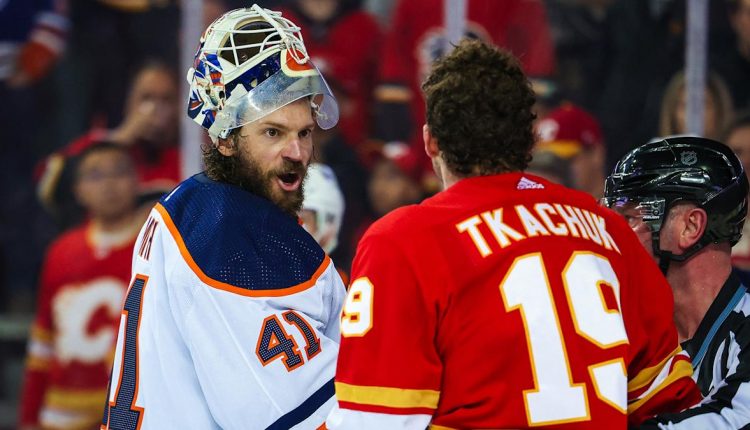 The upcoming playoff series between the Edmonton Oilers and Calgary Flames has drawn tons of excitement among Albertans, including some of the province’s politicians.

On Monday, Calgary mayor Jyoti Gondek made a bet with Edmonton mayor Amarjeet Sohi over the outcome of the series. As for the stakes, the losing team’s city councilors will be forced to attend the first council meeting after the series wearing their rival team’s jerseys, while the mayor of the losing team’s city will have to rock full face paint of the opposing team.

“I’m confident that I will not be donning orange and blue paint,” Gondek said. “I’m very much looking forward to seeing Mayor Sohi wearing the Flames ‘C’ on his face.”

The Flames and Oilers are bringing their heated rivalry to the NHL playoffs. (Sergei Belski-USA TODAY Sports)

While many believe the favored Flames will come out on top in what is a highly anticipated series, a very biased Sohi sees it differently.

“I will be cheering on the Oilers every step of the way, and will happily send Mayor Gondek well wishes when the Oilers beat the Flames and move forward in the playoffs,” he responded.

Regardless of the outcome, this series will be a very fun, fast-paced one to tune into. It will also help truly reignite the Battle of Alberta, as these two franchises have not faced off in the playoffs since 1991. While the playoffs are a completely different game, they did play one another four times in the regular season, with the Oilers taking the first two contests and the flames exacting revenge in the final two.

Game 1 is set to take place at the Saddledome in Calgary on Wednesday night, while Game 2 will occur on Friday. The two teams will then head to Edmonton to play Games 3 and 4 at Rogers Place on Sunday and Tuesday.