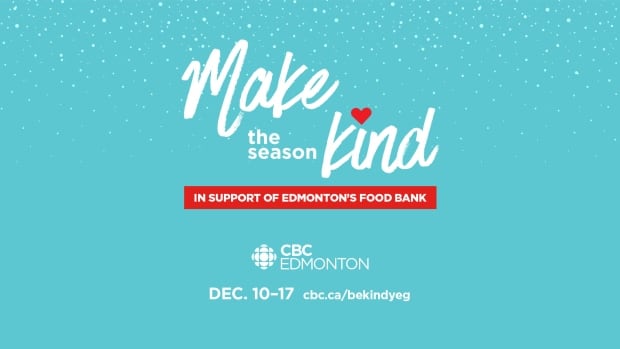 Prior to that year, most of the money raised through the annual December campaign at CBC Edmonton for Edmonton’s Food Bank was $ 655,878 in 2016.

“We are overwhelmed and humbled by the way CBC listeners have embraced Make the Season Kind with their generous gifts and kind messages of hope,” said Marjorie Bencz, executive director of Edmontons Food Bank. “We appreciate your support.”

The campaign was formerly known as Turkey Drive, but like many things this year, it had to turn.

CBC Edmonton couldn’t safely accept frozen turkeys and personal donations at its downtown studio, so it renamed the campaign Make the Season Kind. The campaign has also focused on stories of kindness and giving in the community.

Stephanie Coombs, director of journalism and programming at CBC Edmonton, said the response to the campaign has been unprecedented.

“We were overwhelmed by the generosity and support of our loyal CBC Edmonton audience,” said Coombs.

“This year has tested everyone, especially the most vulnerable and needy, but the kindness of our fellow Edmonton citizens for the Edmonton Food Bank should be welcomed and celebrated.”

The record-breaking total in 2020 is due in part to corporate donations. Many companies donated funds to the blackboard instead of hosting employee parties. Ledcor, Epcor, ATB Financial, Enbridge, Telus and Park Paving all made significant contributions to the Make the Season Kind campaign.

“Because of the pandemic, we had to cancel our annual holiday celebrations across the company,” Katherine Coutinho, senior director of corporate communications for Ledcor Group, told CBC Radio’s Edmonton AM.

“We wanted to find a way to express our gratitude to our employees for their dedication and hard work, especially this year.”

Long-term donors also increased. Stan Russo, an Edmonton optician, has supported the CBC Edmonton Food Bank’s fundraiser for more than a decade. Its clinics had to close in March and April and are now operating under strict new public health measures. Even so, Russo decided it was important to pass on.

“This has been a tough year, but it was even more difficult for other Edmontoners. We wanted to pull together and support the community,” Russo told Edmonton AM. He and his clinic staff contributed $ 2,700 to Make the Season Kind.

In addition to monetary donations, listeners and viewers also submitted their own kindness stories in order to win a daily prize or one of two main prizes.

First Grand Prize is a turkey dinner with all the Westin Edmonton ingredients and leftovers, plus an overnight stay in a deluxe king bed with in-room dinner and breakfast for two.

The second grand prize is an illustrated CBC print designed by Edmonton artist Stephanie Simpson. Simpson also generously donates a copy of the print for the winner to gift to a friend.

The grand prize winners will be announced on Friday at 5:05 pm on CBC’s Radio Active.

14 of the very best issues to do that week in Edmonton: September 26 to October 2