Love is within the Air helps Edmonton household say goodbye

Thanks to a Dutch reality television show, a dying Edmonton man was able to hold his grandson for the first time before saying goodbye.

Joel Purkess is a professional drummer, he moved to the Netherlands seven years ago after meeting his wife while on tour in Europe. Five years ago they were married and their son, Finn, just turned one.

Finn was born three months premature. With multiple complications, Joel said he and his wife spent every day in the hospital watching their new baby being hooked up to machines.

“It was a terrible, terrifying experience,” Joel said. “There were so many IVs in him that when we wanted to hold him it took 10 minutes to disconnect everything.”

But they got through it. Joel said they found moments of joy and happiness, supporting each other and loving each other through the difficult moments. Three months later, the three of them left the hospital together to go home as a family for the first time.

Then Joel got the call.

“Just as Finn came home, my father called me via Skype and said, ‘They told me I have about a year left to live,’” Joel said.

“It was such a rollercoaster of so happy our baby is home and so devastated that my father is quite sick.”

Joel Purkess said he is so proud of how far his son, Finn, has come.

Joel’s dad, Al Purkess, had been living with prostate cancer for the last 14 years. After trying various treatments and joining several studies, he was told there was nothing more his doctor could do, the cancer was terminal.

Joel didn’t know what to do. Travel was restricted, the pandemic had dried up his work as a drummer and the baby was still so fragile. Joel and his mom, Patti Hunter, tried to figure something out but there didn’t seem to be a way to make it work.

Then, Joel saw an ad on the television for a reality series that reunited people, called Love is in the Air. He said he thought they had a shot, so he wrote in and hoped for the best.

“We have a really tragic story, but also a really beautiful story,” said Joel. “We’re so proud of our baby, and maybe surprising my father with a visit would be the thrill of a lifetime and one more special gift for him.”

“I looked at Robert, I looked at my wife and I realized we’re going to take my family to Canada,” Joel said. “And I just burst into tears.”

Brink explained that, as long as Joel kept the trip completely secret, the show would pay for the flights and help them arrange the trip. Two weeks and some non-disclosure agreements later, the television crew arrived at Al and Patti’s door.

“Both of us were so stunned and shocked by this group coming invading our house, we didn’t ask any questions,” Patti said.

The confusion turned into shock and then joy and tears as Brink broke the news that Joel was outside. Camera crew scrambling after her, Patti rushed across the room to meet Joel. They hugged for what felt like an eternity, said Patti, everyone crying.

Then came in Joel’s wife and their son.

“Another round of tears. Pass around the Kleenex. Everyone was just thrilled,” Patti said. “And Al got to hold Finn.” 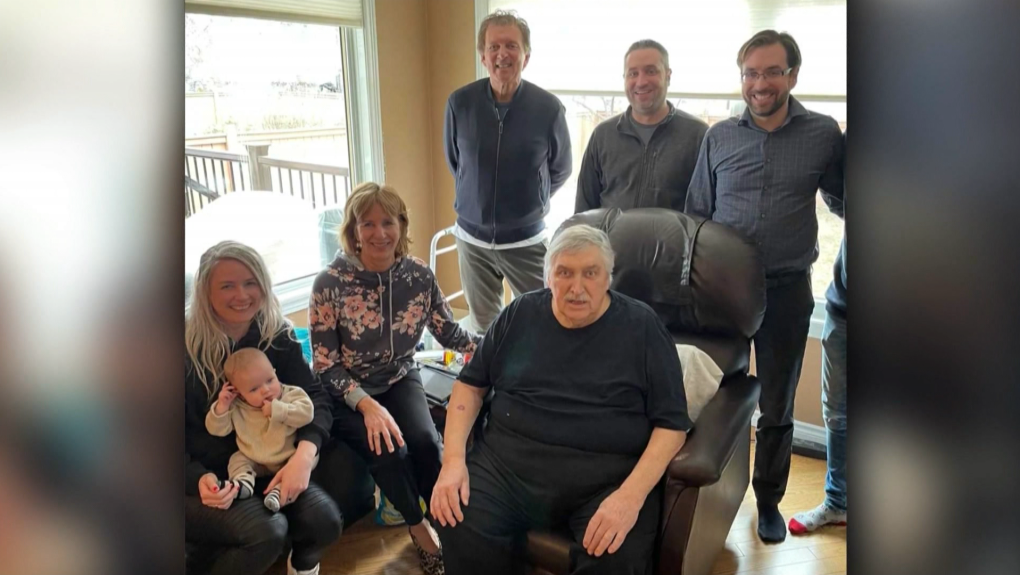 It was a bittersweet reunion for the Purkess family, as baby Finn got to meet his grandfather for the first and last time.

Joel’s parents were shocked to see them, but Joel was shocked too. He hadn’t seen his father in a few years, and he was taken back by the condition he was in. Al couldn’t really move from his chair, so the family spent the next week and a half close to home watching the Edmonton Oilers make their way to the playoffs.

Finn sat in Al’s lap, and Al told him how much he loved him – how much he would always love him. He asked him to have a good life and to take care of his family and his parents.

“It was just a lifetime moment,” Patti said, at the right moment.

“It was probably the perfect time to come,” she said. They were here for a couple of weeks, and after they left he just started to go downhill.”

Al went into the hospital soon after everyone had left, and Joel decided to head back by himself. The two had already said their goodbyes, so Al wasn’t expecting another visit.

“He had no idea again,” Joel said. “He said, ‘no more damned surprises.’ But he was so happy to see me and asked if he could hold my hand and we had a beautiful day.”

His family remember an honest, hard working man with a wonderful sense of humor and a thirst for knowledge. He was a teacher, a mentor and a loving father. It’s the kind of dad Joel wants to be for Finn, and he’s considering making his upcoming tour his last as a touring musician. He said the experience has him considering staying closer to home and focusing on teaching.

“It’s really made me think of the things that I loved about my father and the really great attributes that he had, and wanting to emulate that as well and carry on his great, fantastic example as a father.”

“He was always there for me and I want to always be there for my child as well.”

Three to eat: following the meals vehicles at Style of Edmonton