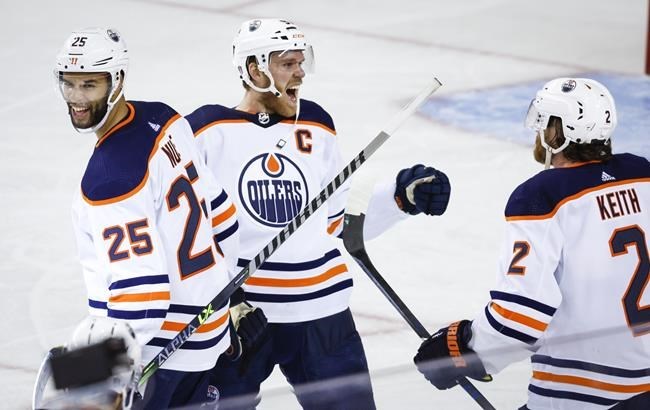 EDMONTON — The Edmonton Oilers have made it through two rounds of the NHL playoffs, but they’ve used two Game 1 mulligans along the way.

They’ll look to start strong this time around against the Colorado Avalanche when the Western Conference final kicks off Tuesday in Denver.

“We want to have a good first 10 minutes, good first period,” defenseman Tyson Barrie said Saturday after the Oilers practiced at Rogers Place. “Everyone has got to be ready, that’s a good club coming against us. In those two (Game 1s) we probably could have played better for sure.

“But they’re in the past and they don’t carry over.”

In the first round, the Los Angeles Kings built an early 2-0 lead on Edmonton en route to a 4-3 Game 1 victory. The Oilers came back to win the series in seven games.

In their second-round series opener against Calgary, the Oilers gave up two goals just 51 seconds into the game. The Flames went on to win 9-6 before Edmonton stormed back to win four games in a row.

The top-seeded Avalanche, meanwhile, led by blueliner Cale Makar and star forward Nathan MacKinnon, secured their spot in the third round with a Game 6 win over St. Louis on Friday night. Makar was second among league defensemen with 86 points this season and MacKinnon has 13 points in 10 playoff games.

The Oilers, who finished in fifth place – 15 points behind Colorado – in the conference standings, have had standout performances by Connor McDavid and linemate Leon Draisaitl, who share the playoff scoring lead with 26 points apiece.

“We’re playing good hockey, we beat a good Calgary team (and) it’s only going to get harder,” McDavid said. “We’re playing a real good Colorado team and it’s going to take our best.”

Coach Jay Woodcroft promised his team would be ready to come out strong at the start of Game 1 against the Avalanche, but noted the Oilers managed to rally in their previous series openers.

“We didn’t come out with the wins in game No. 1, but we were in both games,” said Woodcroft. “Both of them were tied in the third period. For us, we look at every inch of film, every inch of preparation and see where we can be better. It’s just what we do.

“And in the end, we want to make sure that we’re ready to play game No. 1 on Tuesday night. That started today with a little bit of practice, and it’s going to carry into our following practices. We will be ready .”

The Oilers and Avalanche faced each other three times in the regular season.

The Avalanche won twice, once in a shootout and another in overtime. Edmonton won 6-3 on April 22, with Evander Kane – who has 12 goals so far in the playoffs – notching a hat trick.

Colorado may be a slight favorite given its top seeding but the fact that the Oilers earned points from all three matchups should buoy them going forward.

Woodcroft said his players have adjusted their styles and handled adversity well in both series.

“Both of those teams represented pretty different challenges,” he said. “For us to navigate our way through each series, which was completely different, I think it serves us well.

“It strengthens and heartens our belief.”

This report by The Canadian Press was first published May 28, 2022.