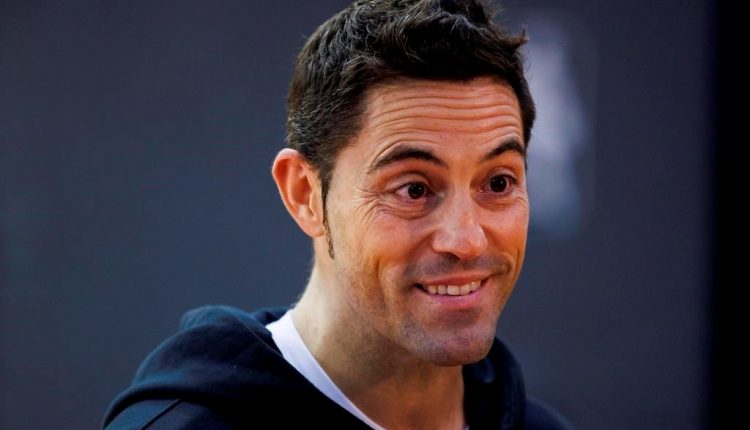 TORONTO — Victor Lapena left a steady job in his hometown to move to Ibiza, Spain, for his first professional coaching gig. It paid him 600 euros a month.

But it opened a door to something better, and then something even better, and eventually to Toronto to lead Canada’s women’s basketball team in its quest to be among the world’s best.

“Everything is connected, like when Steve Jobs talked about adding up the points, linking the points in your life,” Lapena said.

Sitting in Canada Basketball’s offices in Toronto’s west end, and a few days before flying to Edmonton for the Canadian women’s pre-World Cup training camp, the 47-year-old Spaniard laid out those points. He’s coached 10 pro teams in Spain, Russia and Turkey, plus logged more than a decade with Spain’s national program at both the youth and senior women’s levels.

Lapena most recently led Fenerbahce to an unbeaten season and a Turkish Cup title, and was named EuroLeague Women’s Coach of Year in 2020. He caught one of the last flights out of Istanbul on March 20, 2020, when the COVID-19 pandemic locked down much of Europe. He spent the next three months under strict lockdown with his family.

Family was a big reason why Lapena accepted the Canada job. The fact Canada’s education system ranks among the best in the world was attractive. Plus, after living apart for the better part of four years, he and his family are back under one roof.

Lapena recently moved his wife and kids from their seaside home just outside Barcelona, ​​where “there’s always sun,” to the lakeside Port Credit neighborhood in Mississauga, Ont. His son is keen to try baseball after seeing the crowd arriving to Rogers Center for a Blue Jays game while they were visiting the CN Tower. His oldest daughter has found a basketball team to play on.

It’s not an easy transition, Lapena said, from a club team to leading a national program, but after three “super stressful” years living away from his family in Turkey, he’s thrilled they’re together in Canada.

“My life will be basketball and family. So for me, it’s perfect,” he said.

And he was sold on the passionate message about the program delivered by Canada Basketball’s CEO Michael Bartlett.

“I want to try to do something special for Canada Basketball, and to help the development of the players here, to help the basketball team, the women’s team, to get a medal.

“Can you imagine this?” hey grinned “So, this is an amazing challenge for me.”

Lapena and the Canadian women will gather in Edmonton on Wednesday to train ahead of next month’s FIBA ​​women’s World Cup in Australia.

Lapena has only had a couple of weeks in total with his new team — including the World Cup qualifier in February in Japan shortly after his hiring.

“I’m excited to be in this atmosphere, to know that I’m going to have at least almost one month to prepare and to build the team before the World Cup . . . and it’s the World Cup, all the best teams in the world,” Lapena said.

While he’s not focused on results, he said how Canada presents itself in the World Cup is “very important.”

“It’s the first opportunity we have to show everyone that the Canada team: our style is very, very competitive. I’m not going to talk about results. With our players, it’s about being very competitive, try to do your best in each minutes of the game.” he said.

Lapena started playing basketball at age eight. His best friend’s dad was a basketball coach. His own dad had dreams of his son following in his footsteps as an engineer, but Lapena was drawn to coaching when he was still in high school, and then studied anatomy in university to supplement his basketball coaching knowledge.

His dad has since become a huge fan of whatever team Lapena is coaching, including Canada.

Lapena sees himself more of a teacher than coach. The Spanish word for coach is “entranador,” he said, and grabbed paper and pen to write the word out.

“We use different words,” he said. “We don’t use ‘coach,’ ‘head coach.’ Entranador is more like trainer, it means teacher of basketball. I teach basketball.”

He feels the Canadian team has “amazing talent,” including young stars such as Aaliyah Edwards, and veterans he can rely on such as Natalie Achonwa and Kayla Alexander.

Canada was drawn in a difficult group for the World Cup that tips off Sept. 21 in Sydney, Australia. The Canadians face Japan, France and Serbia, who finished second through fourth respectively at the Tokyo Olympics, and host Australia.

“But even this is good . . . for us to play against these kinds of teams,” Lapena said.

He’d love at some point to collaborate with Canada’s men’s coach Nick Nurse, and coincidentally bumped into Nurse coach on his first day in Toronto. He and his wife pulled up along Nurse at a red light in Port Credit. Lapena leaned across his wife to roll down the window and say “hi.”

“I hope I have time to talk with him and to go to visit him at Raptors . . . because his experience is very high,” said Lapena, who has close ties to Spain’s men’s coach and former Raptors assistant Sergio Scariolo.

The Canadians open the World Cup on Sept. 22 versus Serbia.

This report by The Canadian Press was first published Aug. 23, 2022.