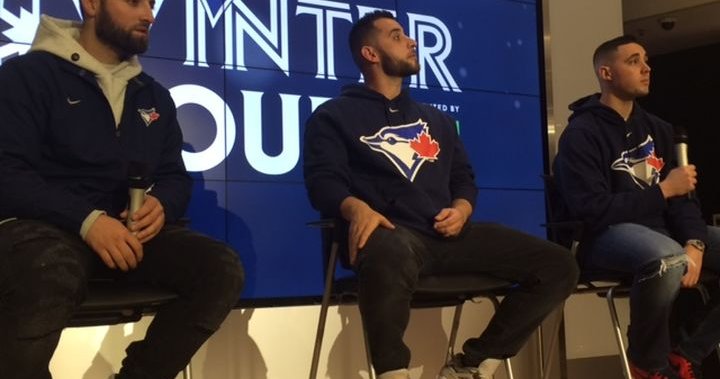 IN PHOTOS: Blue Jays’ go to to Edmonton is properly obtained by followers – Edmonton

A sea of ​​blue greeted Kevin Pillar, Marco Estrada, Aaron Sanchez and Devon Travis of the Jays as they arrived for an autograph session in downtown Edmonton on their winter tour.

Fans received tickets for the event through a lottery system.

The players were greeted by exuberant chants of “Let’s go Blue Jays” as they met with fans.

The players were thrilled to see how much their fan base expanded beyond Canada’s largest city.

A starting pitcher for the Jays, Estrada said no matter where the team goes through Canada, “you will see Blue Jays fans”.

Players will meet with children and their families at Stollery Children’s Hospital on Saturday before returning to Rogers Place to watch a hockey game as the Edmonton Oilers host the Calgary Flames.

“It’s always something I have to sign up for,” said Sanchez of the upcoming visit to Edmonton’s Children’s Hospital.

“Sometimes it can be nice for parents too … (to see) joy on their children’s faces,” added Pillar.

View a photo gallery of visiting the Blue Jays in Edmonton below:

Kevin Pillar, Marco Estrada and Aaron Sanchez of Toronto Blue Jays meet up with fans in Edmonton on January 13, 2017.

An empty podium at Rogers Place before several Toronto Blue Jays arrive to take a seat on January 13, 2017.

Kevin Pillar and Marco Estrada at Rogers Place on January 13, 2017.

The Blue Jays fan base has grown even more fanatical in recent years with several successful seasons. Last year the team advanced to the American League Championship Series before losing to the Cleveland Indians.

As the players look optimistically towards another successful season, they are likely to feel the loss of power that Edwin Encarnacion has over the team that eliminated them in the off-season.

“Nobody can follow in Eddie’s footsteps, we’re not asking them to,” said Pillar. “We all have to strengthen ourselves.”

There is also widespread speculation about the future of fan favorite Jose Bautista, who is a free agent this off-season.

The players also shared how impressed they were with the Oilers’ new arena. They hope some of the building’s bells and whistles will find their way into their Toronto stadium soon.

“This is sick,” said Sanchez, one of the team’s starting mugs. “I know our boys will be trying to renovate some of the things at the Rogers Center in Toronto, so there are a lot of ideas (here) – it’s definitely state-of-the-art.”

“Hopefully we have one of those trophy rooms in our place to the east,” he said of the Oilers’ Stanley Cup display case.

– With files from Emily Mertz.