A familiar Whyte Avenue pizzeria is back, but it won’t be easy for Edmonton fans to get a slice.

The Funky Pickle disappeared from the southside strip in 2015. It’s back now, rolling through southern England, in the form of a food truck.

“It’s still an iconic brand in Edmonton,” owner Bob Vandal said during an interview in Farnham, UK, with CTV National.

“I just thought we had to rework that brand and bring it back to life somehow.”

Vandal was born in England, but he lived in Alberta for about 60 years.

He moved back to the London area with his partner Cheryl and his son Colton, and they took the Funky Pickle brand with them.

Bob Vandal and his team in England. (Source: The Funky Pickle)

“I knew I was going to come back here one day and do something with food,” Vandal said.

“The reward is freedom. We can travel anywhere we want,” Cheryl said.

“Everybody loves it. We have a great following, our customers are the best, we call them our ‘funky peeps,'” she added.

‘IT WAS JUST SOMETHING WE ALWAYS DID’

Vandal said the first Funky Pickle opened in Edmonton in the 90s. He hasn’t always owned the brand, but is proud to now, and is one of his own best customers.

“They just don’t have that food that I love (in England). The pizza and the wings and the poutine and all that,” he said of the revised menu.

The truck is pure Canadiana as well, complete with maple leaf flags and graphics of the Rocky Mountains, a tipi and even a moose.

“It’s the flavour, and the gravy. And the wings are absolutely phenomenal. The honey ones, wow, everybody in the pub loves them.” 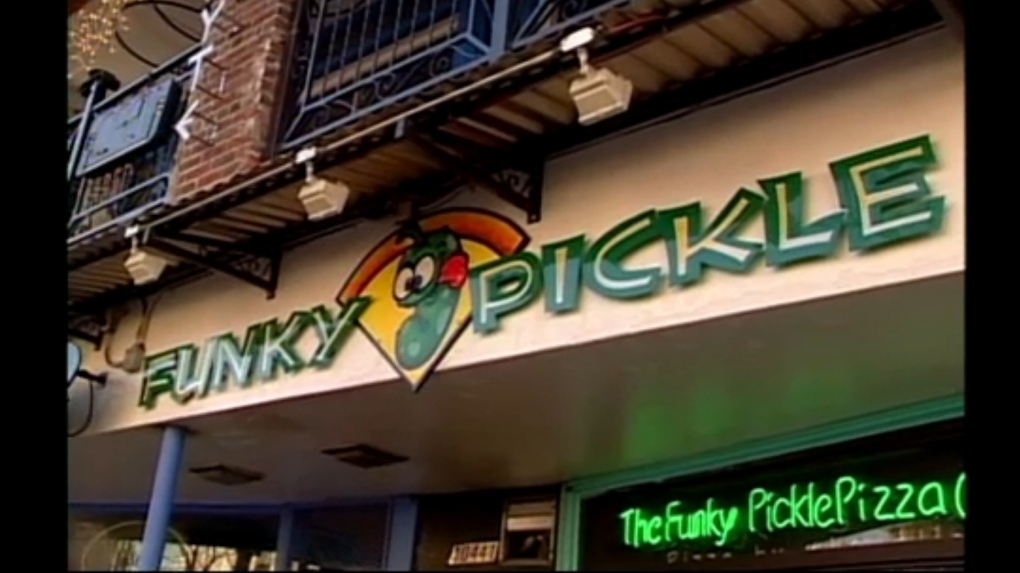 The Funky Pickle location on Whyte Avenue in 2006.

The brand is still known, and missed, in Edmonton as well.

“They just always put honey on their pizza there. I don’t know, it was just something we always did after a night of drinking, I guess,” one person walking on Whyte Avenue told CTV News Edmonton.

Vandal said Edmonton fans might not have to miss Funky Pickle much longer, however. He didn’t provide specifics, but said a return to the city is on his menu.

“Just stay tuned. Funky Pickle might be back on Whyte Avenue sooner than you think,” he said with a smile.

Here is what a one-bedroom rental will value you in Edmonton vs. Calgary