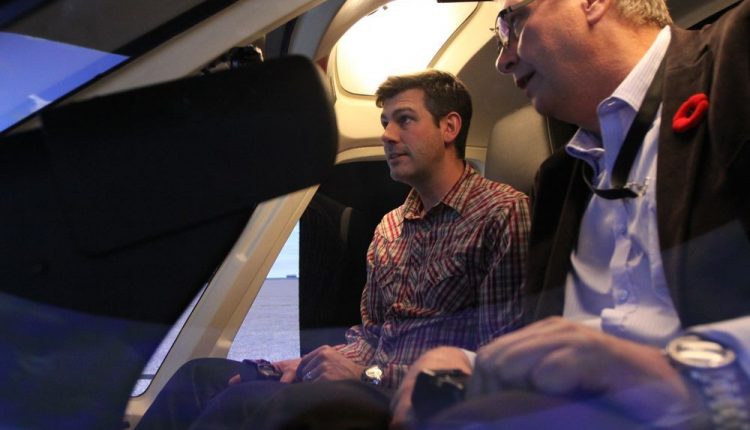 Helicopter simulator at Edmonton Worldwide Airport, considered one of solely two on this planet

Edmonton International Airport has a new installation and although it has a “play area” and makes grown men behave like 10-year-olds, it is not a toy.

“It’s there. It doesn’t take long before your brain is completely convinced that you are flying an airplane. Even though there is no movement,” says Olson, who has been flying helicopters for 40 years and logged more than 100 hours on the new device has as it is to be certified as a top training simulator by Transport Canada.

“You don’t feel the forces, but you will have the feeling that they are moving because the visual system is so powerful with a field of view of 200 by 70 degrees. When we get up in these cockpit seats, you are totally immersed in the visual” , he said.

“If you’re motion sick, it’s not necessarily a good thing, but you will feel like you’re there.”

Within seconds of “takeoff”, the pilot’s senses are deceived by the visualization, so that it feels as if the aircraft is taking off even though it is only a few centimeters above the ground.

“I flew a helicopter like this in real life and it felt very similar. Just the vibration of it all and then if you correct too much because I flew it, then you really feel it, your stomach is in your heart, “said Edmonton’s Mayor Don Iveson, who was one of the first to use the simulator at launch to use on Thursday.

Aside from being a fun experience, the Mayor said the fact that it is the only one of its kind in Canada – and one of only two in the world – will make money for the local economy by educating and educating the outside world work on local people who use the device to become pilots.

The airport installed a similar system last year to train 737 pilots, and airport CEO Tom Ruth said traffic has been healthy since then. He said the airport’s new additions will create 2,000 more jobs for the local workforce by around that time next year.

The simulator cost $ 3.5 million, most of which was paid for by the private aviation company Canadian Helicopters and $ 425,000 by the Alberta government to install.

“We can train our pilots much more effectively than we can on the plane,” said Bob MacKay, vice president of special projects for the HNZ Group, the company that owns Canadian Helicopters.

Because the machinery is on the ground, pilots can experience unexpected weather, difficult landing terrain, and mechanical malfunctions without seriously endangering anyone. The simulator even enables pilots to land in places that have never existed before, such as on the roofs of Edmonton buildings, right on Winston Churchill Square or in the Ball Diamond on Telus Field.

The prices for training in the simulator have not yet been set, but MacKay said he expected them to be cheaper than flying a real chopper, and since no fuel is used, the carbon footprint will be minimal.

The device was certified by Transport Canada last month and is awaiting certification as a Level 7 device, which means that time spent on it can be counted as flight time by student pilots.

Demand is rising within the surrounding communities of Edmonton