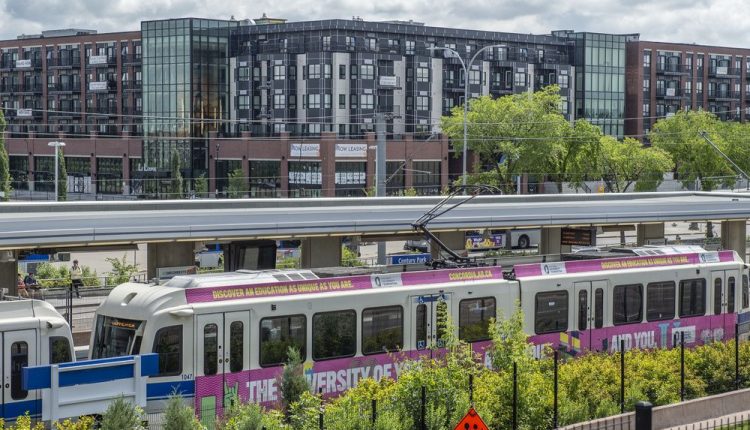 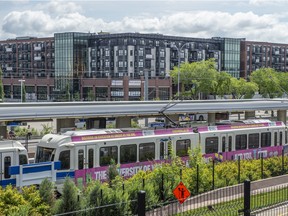 This LRT station at Century Park has been integrated into the high density community around it on July 16, 2022. Photo by Shaughn Butts /Postmedia

Several thoughts went through my head recently as I endured my first ever $90 fill-up at the gas station.

Nozzle in to nozzle out, watching the costs climb at lightning speed on the pump, I realized the average Albertan would need to work about three hours to afford what took 30 seconds to put in my tank.

Then I started to wonder what else I could have done with the extra $25-$35 I’d have in my bank account if the seemingly more “normal” prices we saw in 2021 were still with us.

A handful of purchases at the farmer’s market. A decent meal at a restaurant. A couple of adult admissions to K-Days. A two-month online subscription to the Edmonton Journal. (Sorry, I couldn’t help one shameless plug).

Our Groundwork readers have clearly had some of the same thoughts on how their discretionary spending — or essential spending, in some cases — has been squeezed. Cost hikes for food, utilities and pretty much everything else has hurt, but there is particular displeasure right now at gasoline prices.

While some relief has come from the suspension of the provincial gas tax, our readers have proposed a number of other remedies. These include suspending the federal carbon tax, introducing fuel rebates, taking a percentage of company profits to help low-income households, and putting a cap on profit margins that can be charged at the pump.

I won’t go into depth on these ideas, in part because Groundwork has discussed similar proposals in past articles.

However, the profit-margin conversation is relevant at the moment, given recent accusations from political leaders and consumers of price gouging. As those allegations go, the high pump prices we continue to see are not simply a matter of oil prices, which remain elevated but have also been declining.

And indeed, the numbers do indicate that something unusual is going on with the retail market right now, says University of Calgary economist Trevor Tombe.

From about 2007 to 2021, Alberta retailers earned an average margin of around eight cents per liter.

This past week, it’s been closer to 35 cents per liter.

(For comparison, margins nationally are averaging about 15 cents).

As for crude prices, they were contributing about 90 cents per liter of gas back in early June. That has since declined to around 77 cents, and yet overall pump prices are higher now, he said.

“Something is different in Alberta. I can understand people’s reaction to think it’s gouging, but I would caution against that because if it is, then it would have to take the form of collusion and that is incredibly illegal.”

(Comment could not be obtained from representatives of retail gas vendors).

Another possible explanation is that there has been a spike in demand for fuel of late, as consumers head out on holiday road trips.

It has been an open question as to whether expensive gas, and high inflation generally, might cut into the province’s recovering tourism industry — which generated more than $10 billion in overall spending in 2019.

Anecdotally at least, that doesn’t appear to the case. Highways still appear to be busy, along with campground reservations and traffic at many of the usual tourist spots.

The little data we have backs this up. Travel Alberta reports that hotel occupancy is back to 56 per cent, which is on par with 2019. Tourism Jasper says hotels and park gate numbers have been climbing steadily but are not quite back to pre-pandemic levels.

After a couple of years of COVID-related restraint, it seems people are eager to enjoy a vacation this summer, but there is uncertainty about how sustainable that demand is if we continue to see high costs. Visitation from the US and overseas could be particularly affected. Recent survey data from Destination Analysts found more than 60 per cent of Americans plan to stay closer to home if gasoline prices refuse to shrink. 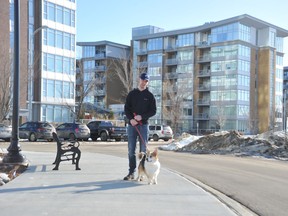 Speculation has increased that high gas prices might spur more major transit-oriented development like Century Park in south Edmonton at 23 Avenue and 111 Street. The condo development is beside an LRT station. Photo by Walter Tychnowicz /Walter Tychnowicz/Wiresharp Phot

Of course no one really knows how long costly fill-ups will be a thing, though some analysts suggest the grinding war in Ukraine, growing demand, continued supply issues, and other factors could be with us for a while.

(Plus, the oil industry’s love of profits never really goes out of style).

If so, it’s interesting to wonder how that might affect certain consumer, lifestyle and business choices. In Edmonton, one of the questions that has come up is whether it might accelerate urban design goals around increased density, more efficient transportation and fewer emissions.

Edmonton’s City Plan is built around the idea of ​​15-minute communities, in which people’s homes are in easy reach of most of their destinations, such as medical services, shopping and recreation.

The plan envisions a rebalancing of residential development, with more housing growth handled through infill and multi-family projects and less emphasis on new single-family developments. Similarly, the city would eventually like to see transit and active transportation trips — biking, walking, etc. — occur at twice the rate they do now.

The problem is that while there is some demand for this, such a culture change has not been a universally easy sell.

That’s why there has been speculation — or perhaps wishful thinking — that persistent $2-a-liter prices could be sufficient to alter market conditions. As the theory goes, increased desire for a lifestyle of minimal car usage would provoke the development industry to provide more such housing options through infill, and to find innovations for lowering the costs of those projects.

And unfortunately, such costs are still a major obstacle. It remains far cheaper to construct homes on an open greenfield site on the edge of the city than to build in a mature community, said Kalen Anderson, executive director of the Urban Development Institute, which represents leaders in the Edmonton development industry.

In that sense, affordability works in two ways. A house in proximity to the urban core near a transit hub might cancel the need to buy gasoline and car insurance, but the price of that home could easily be twice as expensive as buying in a new subdivision.

Centrally located condos and apartments might be more competitively priced, but the idea that today’s younger generations are increasingly excited about living in highrises may be overstated.

Anderson, who was director of the City Plan before moving to UDI, said survey work done as part of the project found that Edmontonians have an overwhelming preference for housing that has some “ground orientation.”

(In other words, access to at least a little piece of land to enjoy the outdoors).

All told, there are a lot of complex factors that influence whether the development industry takes a risk and pivots in one direction or another. Gas prices are just one of many on the list.

“When the pandemic hit and everything was on Zoom, there was a lot of speculation about the death of infill and highrises, and people were talking about the need for larger homes and larger lots,” Anderson said. “This is a new shock. … Our development community is trying to respond to everyone’s needs within a dynamic and slightly unpredictable environment.”

For progress on infill to really accelerate, an increase in market-driven demand will likely need to be met with policy changes to facilitate an increase in supply, she said.

This includes more investment in transit, pathways and bike infrastructure, along with less cumbersome zoning. As well, Anderson said the city needs to better rationalize how costs are shared for expanding utilities, drainage and other common infrastructure in mature areas.

“Ideally, in really well functioning markets, people at all price points could have choice. … We have to be thinking about a lot of different angles and working on all of them. It’s not just ‘build more infill.’ ” 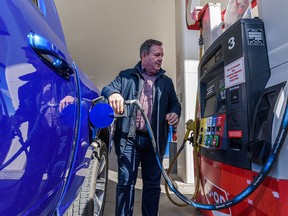 Premier Jason Kenney gases up his truck after a press conference at the Co-op on Macleod Trail SE on Friday, April 1, 2022. Alberta has temporarily cut 13 cents off the price of a liter of gasoline. Photo by Azin Ghaffari /Postmedia