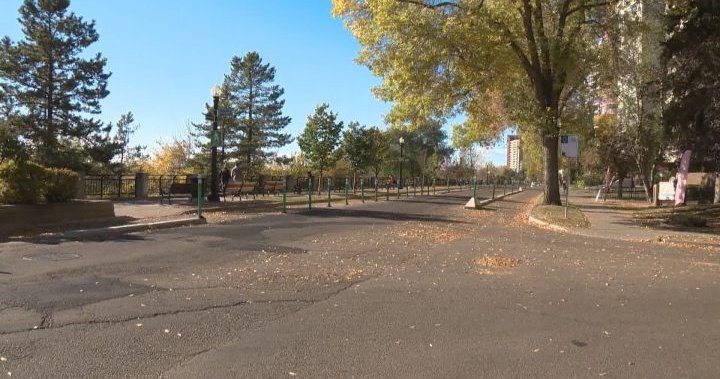 It’s been a frustrating summer for many residents living along the Victoria Promenade on Edmonton’s north side of the River Valley.

“I think the city actually did the opposite in good faith to make it more accessible and friendly to everyone,” said resident Stacey Kuehn.

As part of a pilot project along the popular street, the city added a new bike lane on the north side of the street, ultimately eliminating on-street parking.

“Along with the shock – questions came up, okay, that’s not certain – where was the advice?” said Kuehn.

“It’s not a tone of parking space, but it’s substantial. There are buildings on this strip that do not have visitor parking.”

Local residents noted that the lack of parking is a major concern for people with access issues and there is no convenient place for home care or food delivery services to park.

Emergency vehicles must now stop on the street.

“If the fire truck and ambulance are parked there, it will hold up all traffic on 100 Ave,” said resident Bob Walker.

“From day one it was a major disruption in the neighborhood.”

Many local residents believe that the advice on the project was nowhere near good enough.

“It’s frustrating when you’ve lived here all these years and nobody knows they’re coming and changing the whole dynamic of what’s happening in the area.”

The Victoria Promenade pilot project is problematic for some residents

There is a petition with hundreds of signatures to remove the pilot.

“What we really want to see is just real commitment, really listening to resident feedback and working with us to create a better plan,” Kuehn said.

“We are all very much in favor of bike lanes. We want this space to be used and beautiful and accessible to all, but right now that’s just not the case.”

“There are people who appreciate the infrastructure, but definitely the overwhelming majority (there are) people who have concerns,” Stevenson explained.

“To me, this really shows that we need more effective outreach in more populated areas, so residents aren’t caught off guard — that they’re fully informed,” Stevenson said.

Stevenson noted that she will be meeting with city officials in the coming weeks to determine metrics for the pilot’s success.

Decisions about the project will not be made until after winter.

City staff have set up engagement sessions to gather feedback, which will take place on October 15th and 21st. An online survey is also available.