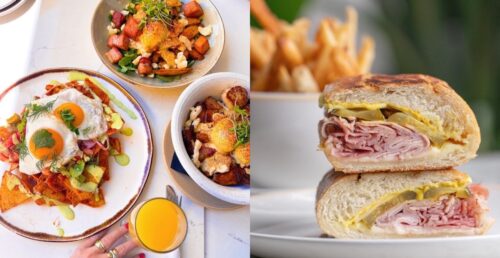 four Edmonton restaurant openings to sit up for this month

Fall is officially here, and it looks like some incredible Edmonton restaurant openings are as well.

There are also plenty of highly anticipated food events in September to look forward to.

Here are four Edmonton restaurant and bar openings to look forward to in September.

Opening in Old Strathcona, it looks like this will be a must-try spot with fresh sandwiches, sides, drinks, and more.

Shrouded in even more secrecy, we haven’t been able to see the menu yet, but there have been a few peeks at a few dishes to expect to try.

Veggie sandwiches on fresh bread, packed with sprouts and house-made spreads will be available, and so will Cubanos, meatball subs, egg salad, and Italian sandwiches with cheese on muffuletta, a Sicilian sesame bread.

This Calgary-founded joint opened its first location in YYC back in 2009. It has since expanded to Edmonton, Saskatoon, Vancouver, Toronto, Kelowna, Winnipeg, and even a few cities in the United States.

Coming to Canada’s largest mixed-use sports and entertainment district, the downtown Ice District will soon see the opening of not one but two massive new sports bars.

Originally announced back in January, this has been in the works for a while and it now looks like both spots will be opening up sometime in September.

The Banquet Bar and The Canadian Icehouse (both part of The Canadian Brewhouse family) will open side-by-side in Edmonton’s Ice District, making for a truly epic spot.

This Canadian Icehouse will be the flagship location for The Canadian Brewhouse, featuring the largest outdoor patio in Western Canada. There will be not only fireplaces and outdoor games out on this massive space but also batting cages!

Yet one more time: excessive climate response activated for Edmonton