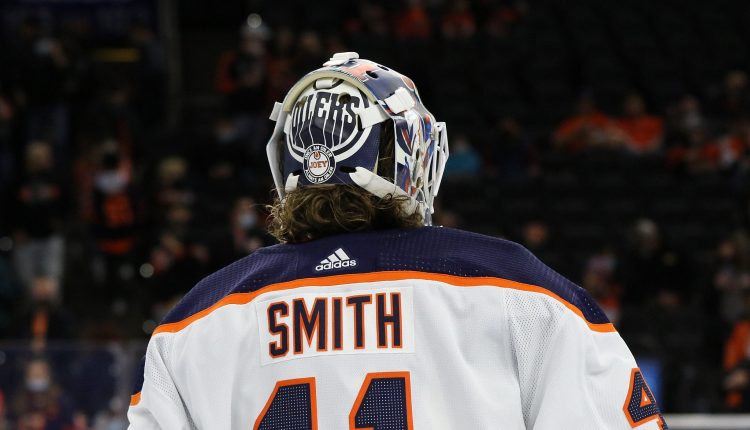 The Edmonton Oilers have now entered the offseason with their series loss to the Colorado Avalanche in the Western Conference Final. That means we should start discussing who may not be returning to the team for next season, whether that’s via trade, free agency, or another reason. So here are four players who likely won’t be back with the Oilers when the puck drops on the 2022-23 campaign.

First, we have starting goaltender Mike Smith. It was a rollercoaster of a season but eventually ended with some below-average play and weak goals against in the playoffs. He is now 40 years old with one year remaining on his contract that has a cap hit of $2.2 million, but there are options before next season kicks off.

Smith was injured at multiple points during the season, which put the Oilers in a difficult position for a big chunk of it. Backup goaltender Mikko Koskinen was forced into a role he doesn’t excel at while young goaltender Stuart Skinner was thrown into the fire. Luckily, Koskinen held his own in the win column and Skinner played better than expected, but uncertainty and the inability to stay healthy from a team’s starting goaltender is not a recipe for success.

Once Smith finally got healthy and back up to speed, coach Jay Woodcroft took over the team and it benefited him in a major way, winning nine games in a row to end the regular season, helping the Oilers clinch a playoff spot, and recording back -to-back shutouts past the age of 40. His showing in Round 1 of the playoffs also gave the Oilers hope, as he finished the first round with the third-best save percentage (SV%) among goaltenders.

It was Rounds 2 and 3 where the Oilers really started to see the mistakes at inopportune times that cost the team goals and games. Sure, the defense could have been much better at times, and Smith did stand on his head, but it was the weak goals that killed momentum and confidence. He handles the puck more than any goalie in the NHL, but he overdoes it sometimes and turns the puck over, leading to great chances against and more often than not, goals.

The Oilers have a few options with Smith such as a trade (cap dump) or buyout. They have a very solid prospect pool, so it wouldn’t be the worst decision to use a mid-round pick, if that’s what it takes, to move his contract for the final year and free up some much-needed cap space. Another option that is entirely possible is retirement. This feels like the last run Smith will make in his long career; even if it was a few years earlier, I’d say he would have had it in him. But since he made obvious mistakes with weak goals at key moments, I don’t think the Oilers can trust going into another playoff with this core and him starting in net at his age.

Skinner will be waiver-eligible starting next season, so he has to be the backup for the Oilers, and at his age, Smith should be a backup at best. The Oilers need someone younger to lead them in the crease and a legitimate starting goalie next season in Smith’s place.

Evander Kane is an intriguing name because of the spectacular scoring he did after he joined the Oilers. He was a big reason they turned things around, as he arrived just in time for them to have one of the best second-half performances of any team in the NHL.

Kane is almost 31 years old and is going to be looking to cash in after scoring 35 goals and 56 points in 58 games for the Oilers in the regular season and playoffs combined. He scored three hat tricks in half a season, two of which were in the playoffs and gave the team a legitimate scoring winger for Connor McDavid along with a ton of physicality.

Evander Kane finished the season as an @EdmontonOilers with: 35-21-56/58GP/+27/97 Pims (Regular season and Playoffs) 3 Factors for most players decisions in Free Agency. 1. Chance to win 2. Money 3. Lifestyle Kane delivered. EDM was a different team with him!

The big question is if Kane is going to price himself out of the capability of what the Oilers can afford, as they have three key young restricted free agents to sign and not a ton of money to work with. He will require the most money to keep, but other teams will also be gunning for him and offering him more than the Oilers can. The upper hand they have is the success with two of the best players in the world and love sent his way because of the great run they had.

A downside though is some of the negatives he brings. Just because he got his life back on track for half a season doesn’t mean there won’t be problems down the road if the Oilers commit to him. That may be the least of things to worry about, as Game 3 against the Avalanche showed the downside Kane can bring, despite being able to put the puck in the back of the net.

Kane was assessed a five-minute major just one minute into Game 3 that inevitably resulted in a one-game suspension. It occurred right after the Oilers had taken the early 1-0 lead at home and were looking to build off the momentum. Nevertheless, they were stuck in their own end for five minutes and actually killed off the penalty. Fellow THW writer Brian Swane made a great statement saying, “Championship players produce consistently, and they deliver when their teams need it most. They don’t put their teams in shorthanded situations at the most unideal times.”

As Kane scored his 13 goals in only six games, he failed to score in any one-goal games while taking 37 penalty minutes in his 15 games played. Swane also pointed out that teams Kane has been a part of have made the postseason in just two of his 12 seasons before joining the Oilers. Is he the solution for the team moving forward? I don’t believe so, considering they have some great young players coming through the system including Dylan Holloway who made his NHL debut in the final game of the playoffs.

A discussion has been going on for the entire season as to what the Oilers should do with Tyson Barrie moving forward. He has two years remaining at $4.5 million which is far too much for what he brings to the table. That money would have been worth it if Evan Bouchard hadn’t made massive strides last season and moved ahead of Barrie on the depth chart.

Barrie was initially brought in on a one-year deal to replace what Oscar Klefbom did on the blue line and run the power play. He did a fine job of that and was signed to a three-year deal to continue to do so while they thought Bouchard needed time to develop at the NHL level. Very early into Barrie’s contract, Bouchard was proving why that decision to bring Barrie back at that cap hit was a bad one.

Bouchard ended up splitting power-play duties with Barrie for most of the season and has given the Oilers a more dangerous shot on the point at 22 years old and a $863,333 cap hit. They may have been hesitant to play Bouchard on the top unit too much considering the future implications it’ll have on contracts, but a move is now needed (from “The major power play shake-up the Edmonton Oilers don’t want, but evidently need”, Edmonton Journal, 2/23/22). There will be interest out there for a player like Barrie as the Oilers desperately need the available money this offseason, and it is much easier to move players when the season is over rather than in the middle. He can play higher in the lineup on a different team as he improved his defensive game over the season, but the Oilers can’t afford to be spending that much money on a third-pairing defenseman when Bouchard can do Barrie’s job at a fraction of the cost.

Of the forwards on the Oilers, Zack Kassian is the most expendable. He stepped up big at times for the Oilers in the playoffs, but he is the type of player that disappears for long stretches. The Oilers can’t afford to have a player making $3.2 million that does not make an impact every night.

Kassian did deserve that money back when he signed the contract considering he was playing top-six minutes, putting up points, and bringing physicality to the lineup. But this season has shown that the Oilers can out-skill opponents and still have many players willing to throw their weight around.

Kassian has had his fair share of injuries over the past few seasons which has thrown his game off a bit. He hasn’t fought as much as the Oilers need him to and has played the majority of the year on either the third or fourth line. He had himself some great games where he was very noticeable like the Oilers’ final playoff game, but as I mentioned, he goes unnoticed in far too many other games. The Oilers may have the most difficulty moving him, but I’m sure there is a team wanting to add toughness, even if the return is minimal. They once again need the cap space and have young talent ready to jump into the lineup and make a difference, so he needs to be moved at some point.

Add these four players to the obvious choices not returning for the Oilers next season in Mikko Koskinen, Derick Brassard, and Kyle Turris, and the team has a lot of work in front of them to fill spots and make the team competitive once again next season .

The Oilers are going to have one of the busiest offseasons in the NHL with the contracts and money they have to deal with. Ken Holland has made some good and some questionable choices thus far as the Oilers’ general manager. This is an important summer where he will need to do more good than bad to be able to allow this team to find even more success in the near future.

Rob Couch is a THW freelance writer covering mainly the Edmonton Oilers and Philadelphia Flyers. He covers everything you need to know about fantasy hockey. He will also keep you up to date with NHL Stats News, trade talks, and daily betting guides.

You can find more of his work here.