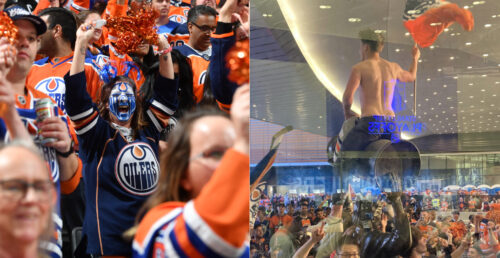 Edmonton Oilers fans had to wait 31 years for the playoff edition of the Battle of Alberta to return.

When the Oilers dispatched the provincial foe, they celebrated accordingly.

Fans piled out of Rogers Place after a 4-1 win in Game 3 of the second round Stanley Cup Playoff series, taking to the streets to enjoy the dominating win that led to a 2-1 series edge in an effort that rivals Calgary’s ‘C of Red.’

Honks, hollers, and happy supporters in blue and orange filed out of the arena and Tailgate Party and onto 104th Ave in a lengthy celebration, which accompanies some telling foreshadowing, perhaps.

One fan went so far as to ride the Stanley Cup attached to the Wayne Gretzky statue just feet from the doors of Rogers Place.

Edmonton is 18-3 all-time overall when taking a 2-1 series lead.

All the more reason to celebrate.