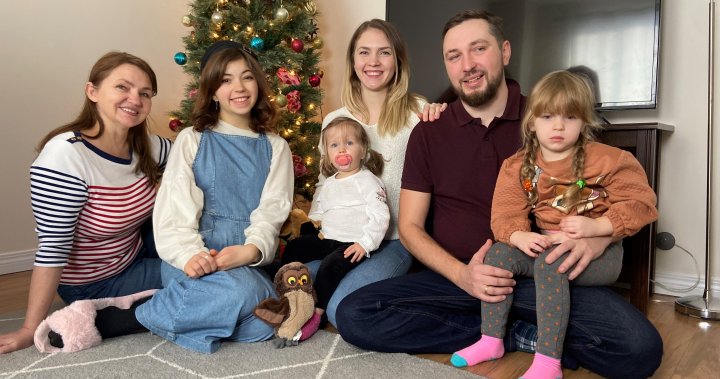 First Canadian Christmas in Edmonton for Ukrainian newcomers: ‘It is a miracle’ – Edmonton

With the war against Russia continuing to rage in Ukraine more than 10 months after it began, many of those who fled to safety in Edmonton are facing their first Christmas away from home.

Many are eager to embrace new traditions in a new country.

“It’s our first Canadian Christmas and we really want to spend this time with family and our new Canadians friends,” said Ksenia Smyrnova, who moved to Alberta from the war-torn nation.

“The day we ran away from the war, we were driving in the car and I thought, ‘We will never be happy again.'”

Smyrnova, along with her sister, mom and two kids were able to flee Kharkiv in northwest Ukraine and travel to Edmonton in May.

Her husband had to stay behind: shortly after Russia invaded Ukraine in February, Ukrainian President Volodymyr Zelensky declared martial law, which included a travel ban restricting most men ages 18 to 60 from leaving the country.

While it took him longer to go through the process, Kharkiv’s husband Alexander Tuz was eventually able to join his family just in time for the holidays.

“We met him at the airport, it was a really heart touching day to see him again, after half a year we didn’t see each other,” Smyrnova said.

‘When I got here, it was the best moment and it was amazing,’ Tuz said.

The family is now looking forward to celebrating both a Canadian Christmas on Dec. 25 and a Ukrainian Christmas Jan. 7, 2023.

‘We didn’t know about Canadian traditions before, now we will read everything and ask our Canadian friends and we will do the same you do here every year,’ Smyrnova said.

Edmonton businessman and volunteer Michael Thomas has helped this family and many other Ukrainian newcomers. He and said he’s working to make this holiday season a memorable one.

“We donate and purchase Christmas trees, bring toys for kids, share our holiday recipes and traditions, invite them for meals,” the volunteer coordinator and owner of SolarNinjas Energy Solutions said.

Happy distractions Thomas said, to help take their minds off the war back home.

“I miss Ukraine very much, I often think about when the war will end and how we will go there and where we will go and what will we do, now it’s my dreams,” Smyrnova said.

While they are unsure when they can go back, for now the family is focusing on creating new traditions in their new home in Edmonton.

“We always saw Western movies, Christmas movies and for us it was like a miracle — but now I am in the miracle,” Tuz said.

0:23
Doctor at hospital near Ukraine’s front lines surprised with visit from husband