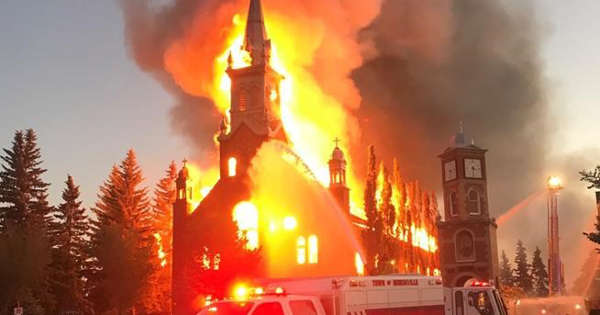 © Provided by The Canadian Press

MORINVILLE, Alta. – Alberta’s prime minister condemns what he calls “arson attacks on Christian churches” after a historic community was destroyed in a fire that caused a small town to cancel its Canada Day celebrations.

The people of Morinville, about 25 miles north of Edmonton, watched early that morning as St. John Baptiste Parish went up in flames and collapsed. Turner said the 114-year-old building was the heart of the community.

He said the city council decided to cancel Thursday’s Canada Day celebrations. The community’s cultural center is to be opened so that people can come together and share memories of the community’s history.

Prime Minister Jason Kenney, who visited the rubble of the church, said it was terrifying to see attacks on faith communities.

“This historic church was in the heart of Morinville and was an important part of the spiritual life of Alberta’s Francophone community,” said the Prime Minister.

On social media, he described the fire as a “violent hate crime against the Catholic community”.

RCMP said the fire was suspicious.

Iain Bushell, general manager of Infrastructure and Community Services of Morinville, said the fire was so severe that the fire department could not enter the building and the roof collapsed a short time later. The former firefighter said the church’s two main towers and front facade had completely disappeared.

He said the cause of the fire was unclear.

“The timing is certainly unfortunate as it is a fairly iconic Catholic Church in our community and the timing of the sad events that have just been exposed in the country,” Bushell said.

There have been several fires in churches across the country since unmarked graves were discovered at the sites of former residential schools. Most of the fires affected the First Nations, including a fire that also damaged a First Nation Catholic church in Nova Scotia on Wednesday.

There was also vandalism against churches and statues in cities.

Four small Catholic churches on indigenous land in rural southern British Columbia were destroyed in suspicious fires and an abandoned former Anglican church in northwest BC was recently damaged in what could be arson, according to the RCMP.

The fires came less than a month after the remains of 215 children were found in unmarked graves on former dormitory grounds in Kamloops, BC

About 150,000 Indigenous children have been forced to attend boarding schools that have operated in Canada for more than 120 years. More than 60 percent of the schools were run by the Catholic Church.

The Alberta government website lists the Morinville Church as historic. Construction of the church was completed in 1907 and the first mass was held on January 1, 1908.

Kenney said the province will double funding to protect churches and other targets from vandalism and violence. He said the Justice Minister will work with police chiefs to step up surveillance of places that could be attacked.

Audrey Poitras, president of the Métis Nation of Alberta, said the ward and church have links with the Métis. Members got married there and recently left shoes on the steps to commemorate children who attended boarding schools.

“Violence and destruction are not the way to go in these troubled times,” she said.

Poitras added that Kenney’s comments will not bring people together in empathy and reconciliation.

“He is quick to condemn this ‘attack’ on the church and I look forward to seeing the same anger from him over the atrocities against indigenous peoples,” she said in a statement.

This report from The Canadian Press was first published on June 30, 2021.

– By Kelly Geraldine Malone in Winnipeg