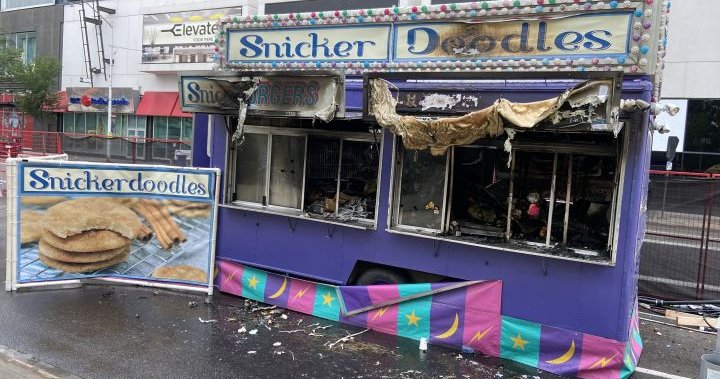 The fire department responded to Edmonton’s tastes Thursday afternoon after a fire broke out on a grocer’s stand at the downtown festival – one person was sent to the hospital.

The fire occurred at a standalone Snickerdoodle booth on 100 Street near 102 Avenue, west of Churchill Square, where the festival is taking place.

The crews were called at 4:44 p.m. and arrived four minutes later. The Edmonton Fire Department said the fire was brought under control shortly before 5 p.m. and reported about 15 minutes later.

A video on social media showed how flames shot from the seller’s booth and people gathered around a man. One patient was transported to the hospital in a known condition, EFRS said.

Global News made inquiries to Alberta Health Services for more information about the injured person.

There is an urgent need for volunteers for Taste of Edmonton

The food stall was burned out in the flames.

“It’s pretty emotional,” said Donovan Vieneau, general manager of Taste of Edmonton. “We celebrated this morning because all final checks were approved today – and it happens just a few hours later.”

Vienneau said the fire was a blow after all the challenges vendors and the festival faced: the 2020 event was canceled due to the COVID-19 pandemic and the restart this year has been exciting for everyone involved.

“You don’t want anyone to be injured, you don’t want to see property damage, you just feel bad about the whole situation.”

Vienneau said the festival has a detailed fire plan that includes inspections, certificates and deregistrations.

“Every restaurant, every food truck, everyone on site must have a fire extinguisher, and thank goodness we did,” he said, adding that two volunteer security guards stepped in to help put out the flames.

Fire investigators are on site and the cause was not known until 6 p.m.

The Edmonton Food Festival Events takes place in Churchill Square from Thursday July 22 to Sunday August 1 – where it returned after its event in Capital Plaza north of the Alberta Legislature while the space in front of Edmonton City Hall was renovated.