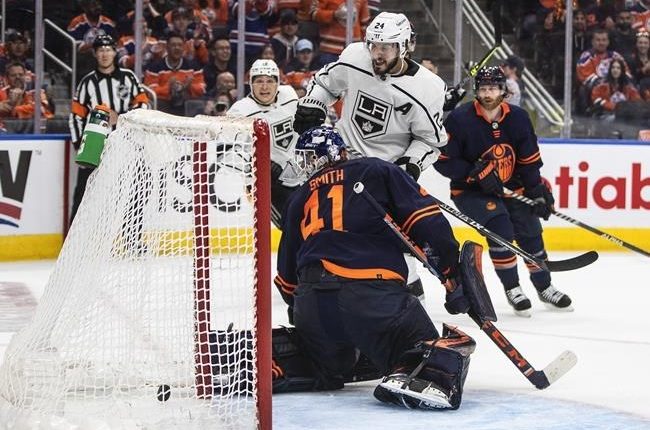 EDMONTON — A late mistake proved costly as the Edmonton Oilers began their playoff run on Monday. Now the team is looking to learn from its errors.

“Playoffs are a long journey. There are going to be ups and downs,” goalie Mike Smith said after the Oilers dropped a 4-3 decision to the LA Kings in Game 1 of the first-round series. “It’s how you deal with it that makes you good or makes you a team that’s watching from the sidelines.”

After falling behind in the first period, Edmonton rallied and went into the third tied at 3-3.

But, the Kings took the lead a final time with just over five minutes left in the game.

Smith tried to clear the puck from behind the net and instead put it on the stick of Alex Iafallo in front. The netminder made a diving save but couldn’t corral the puck and seconds later Sean Druzi ripped a long bomb that Philip Danault tipped in from in front of the net.

“I was just trying to make something happen,” Smith said. “Obviously trying to do too much there. In a tight game like that, you can’t afford to make mistakes like that. It ended up costing us the game. Obviously disappointed, but it’s one game and we move on.”

Danualt, Iafallo and Trevor Moore each scored and had an assist for LA, and Brandon Lemieux contributed a goal.

Connor McDavid and Kailier Yamamoto replied with a goal and an assist apiece, and Leon Draisaitl rounded out the scoring with a power-play tally.

LA goalie Jonathan Quick made 35 saves for the win and Smith stopped 31-of-35 shots.

For Kings’ head coach Todd McLellan, the game was a good example of how his team has played recently, with good checking, excellent goaltending and players taking advantage of their opportunities.

“We played in our skin, we played to our identity, just a carbon copy of how we’ve done it,” he said.

The Oilers finished the regular season second in the Pacific Division with a 49-27-6 record to earn home ice advantage and fans responded by packing Rogers Place with an enthusiastic sold out crowd armed with shiny copper-coloured pom poms for the opening game.

The environment may have played a role in Edmonton going down 2-0 midway through the first period, said McDavid.

“There’s lots of emotion with fans back in the building and I thought we just didn’t handle it all that well,” he said. “(The Kings) got the jump on us.”

Moore opened the scoring 11 minutes in, ripping a shot from inside the face-off circle over Smith’s outstretched glove.

He then set Iafallo up to give LA a 2-0 lead 16:52 into the first. Stationed below the goal line, Moore sent Iafallo a behind-the-back pass and Iafallo wasted no time putting it into the Oilers’ net.

Edmonton cut the deficit before the end of the opening frame with another highlight-reel-worthy goal from McDavid.

The Oilers’ captain sprinted the length of the ice, holding off several Kings defenders, and fired a snapshot past Quick to make it 2-1 with 42 seconds left in the first.

Chants of “MVP! MVP!” followed from the boisterous crowd. McDavid won his fourth Art Ross Trophy this season after posting a league-best 123 points.

The Oilers evened the score early in the second with a power-play marker after Iafallo was called for tripping.

Duncan Keith fired a long-range shot and Yamamoto tipped it in from the back door 2:39 into the period.

The score didn’t stay knotted at 2-2 for long. Lemieux sent a shot sailing from the top of the faceoff circle off a rush 3:50 into the second to restore the Kings’ lead.

Edmonton equalized again midway through the period with another power-play goal after Iafallo was called for cross-checking.

McDavid sent a pass flying off the boards with the puck ricocheting off a broken stick in the slot before Draisaitl settled it and blasted a quick shot past Quick 9:56 into the second.

Edmonton went 2 for 4 with the man advantage on Monday and LA was 0 for 4.

The Oilers are in the playoffs for the third straight season but last year’s run was brief, with the Winnipeg Jets ousting Edmonton in the first round with a four-game sweep.

The group has learned from mistakes it made in the past, Smith said.

“It’s a different team. We’re feeling good about where we’re at. It’s a game of inches,” he said. “A mistake here and there tonight and it’s a different game. We learn from it, move on and worry about Game 2 now.”

Game 2 goes Wednesday in Edmonton. The series shifts to LA for Game 3 on Friday.

NOTES: Defenseman Darnell Nurse returned to the Oilers’ lineup after missing four games with a knee injury. … The Kings were playing without Viktor Arvidsson, who left practice early on Saturday. The winger had 49 points (20 goals, 29 assists) in 66 games this season. … Monday marked the first playoff game between the Oilers and Kings since 1992 when Edmonton bested LA in a six-game series in the division semifinals.

This report by The Canadian Press was first published May 2, 2022.