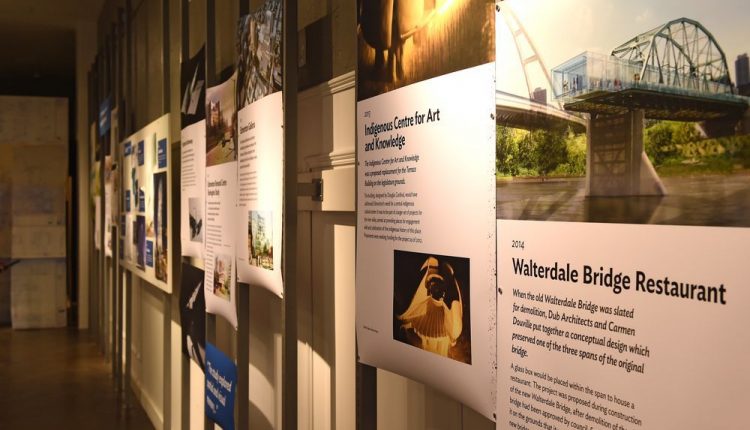 The Unrealized exhibit at Edmonton City Center Mall on October 11, 2019 explores lesser-known urban projects that never made it off the drawing board. Photo by Ed Kaiser /Postal media

Edmonton is home to only a handful of architectural feats that could truly be called iconic. Among them are the Muttart Conservatory, Walterdale Bridge, and the Alberta Legislature.

But if history had taken a different route, this list could have been much longer. That’s the idea behind Unrealized, an exhibition in the Edmonton City Center shopping mall that explores the history of Edmonton buildings and infrastructure that were proposed but never materialized.

“It’s about Edmonton’s undeveloped heritage. We spend a lot of time talking and living about the projects that have emerged that have shaped our city, but I think you can learn just as much about the city from what has not been built, ”said Max Amerongen, board member at Media Architecture Design Edmonton, the group that organized the exhibition.

One development that would have had a huge impact on the city’s skyline was the proposed Centennial Pylon, a 300-foot observation tower that would have stood on the site of the former Royal Alberta Museum in Glenora. Resident resistance led to its cancellation, but the idea of ​​a tower to celebrate Canada’s centenary in 1967 ended with a building elsewhere in Alberta – the Calgary Tower.

The exhibit ranges from buildings proposed in 1912 – like the Royal Alexandra Hotel, which would have been a central downtown landmark – to the Edmonton Superlab, which was canceled by the United Conservative government this fall.

In addition to buildings, Unrealized also examines transport infrastructure that has been left on the drawing board.

The rejected Metropolitan Edmonton Transportation Study would have created great highways that surround the core of the city and cut Oliver and the river valley.

On the public transport side, the plans developed in the 1960s provided for a light rail system with six lines branching off from the city center. In particular, the LRT that exists today reflects the plans that were originally rejected due to public and political pressure. In fact, the original plans call for a line similar to the Valley Line under construction.

“It’s really interesting to imagine how our city would have grown differently, even if it was built in the 1960s or 1970s when it was proposed and we weren’t just sourcing the projects,” said Amerongen.

“It would have completely changed the look of our city in terms of density and the way we move around.”

Unrealized runs on the second floor of downtown Edmonton between Le Chateau and RBC through October 25th. It is open during the shopping mall opening hours, except on Sundays when the exhibition is closed.

Listen to our press gallery podcast on Apple Podcasts or Spotify

Native musicians battle to save lots of Edmonton buildings from demolition –…