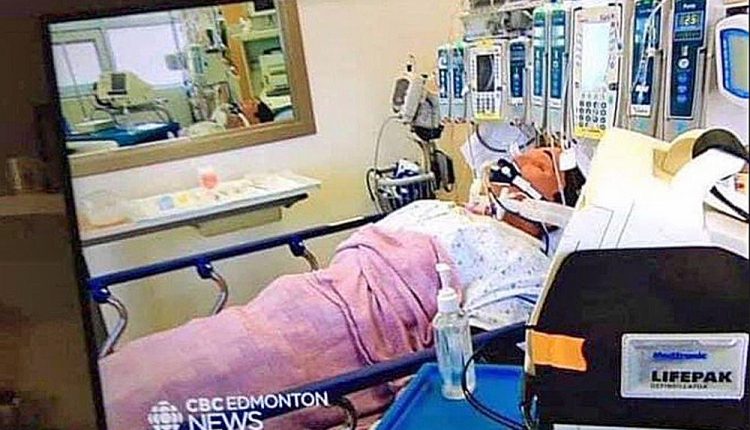 Reuters fact check: Some online users said the use of the mannequin was evidence that the intensive care units in Alberta were not busy

“Look very carefully,” said one Twitter user, pointing to the use of a mannequin in a CBC Edmonton news report. Photo by @Franktmcveety / Twitter

The report, released October 2, included interviews and a mannequin demonstration showing how an intensive care unit differs from other hospital wards. Some of the same footage at the training facility was later aired in another report on COVID-19 projections for Alberta.

Some online users shared a picture of the news report, claiming the use of the mannequin was evidence that the intensive care units in Alberta were underutilized and that the pandemic was being overrated by the media.

Another person who shared the photo on Twitter said, “It’s called a scam, but because it’s media, they get a passport, look very carefully”.

The mannequin was used to demonstrate how equipment works in an intensive care unit and is not evidence that the pandemic threat has been overstated.

“Critical care settings are not settings you want to be [in]. “With so much discussion about ICU bed numbers in Alberta, we asked two experts what makes ICU beds different – and what patients can expect when they are moved to one. #Yeg pic.twitter.com/pcOtnHL17a

The title of the article is, “It’s real. It’s dangerous “: How it is in an intensive care unit”. The description of the clip says, “Respiratory therapist Crystal Grette and Christy Raymond, Dean of the Faculty of Nursing at MacEwan University, explain what makes an ICU bed and ward different and what patients should expect when they land on a ward.”

Meanwhile, CBC Edmonton posted an update on its website on October 11th clarifying that the portions of the report that featured a mannequin were filmed in a university rather than an active hospital intensive care unit: “Some of the Images in this video are from and identified as such by hospitals [Alberta Health Service]. The other clinical footage, including videos of mannequins in beds, was shot by CBC Edmonton in September 2021 at training facilities at the Northern Alberta Institute of Technology and MacEwan University, where students learn with realistic hospital simulations. “

The Facebook video description clearly states that the report explains how ICUs work: “With so much focus on the ICU beds available in Alberta, we spoke to two experts about what an ICU bed actually does differently and what patients can expect when they get it transferred to an intensive care unit. “(here)

The mannequin footage was also featured in an October 7 (1:36s) news report (here).

In a statement to Reuters, a CBC spokesman said: “On October 1st and 2nd, CBC Edmonton released two stories describing the reality of an intensive care unit and the stress on nursing staff. Since we could not bring our cameras to the intensive care unit of a hospital, we shot footage in two training facilities, which was then used for illustration purposes. In the story of October 1st, which was then published on our website here (here), it was not clearly identified as training material and should have been. We have clarified that in the meantime. “

“Unfortunately, some of the same footage was reused in another story about COVID projections for Alberta that aired on October 7th during our 6pm and 11pm news bulletins,” they added.

“In this context, the footage has been used inappropriately, even for illustrative purposes, and we apologize for the misjudgment,” they said.

Reuters previously looked at allegations regarding a news report in the UK that used a dummy for illustrative purposes (here).

This article was produced by the Reuters Fact Check team. Read more about our fact checking work here.

Sign up to receive the daily top stories from the National Post, a division of Postmedia Network Inc.

The next issue of NP Posted will be in your inbox shortly.

Why you may see hilarious costumes in Edmonton this month