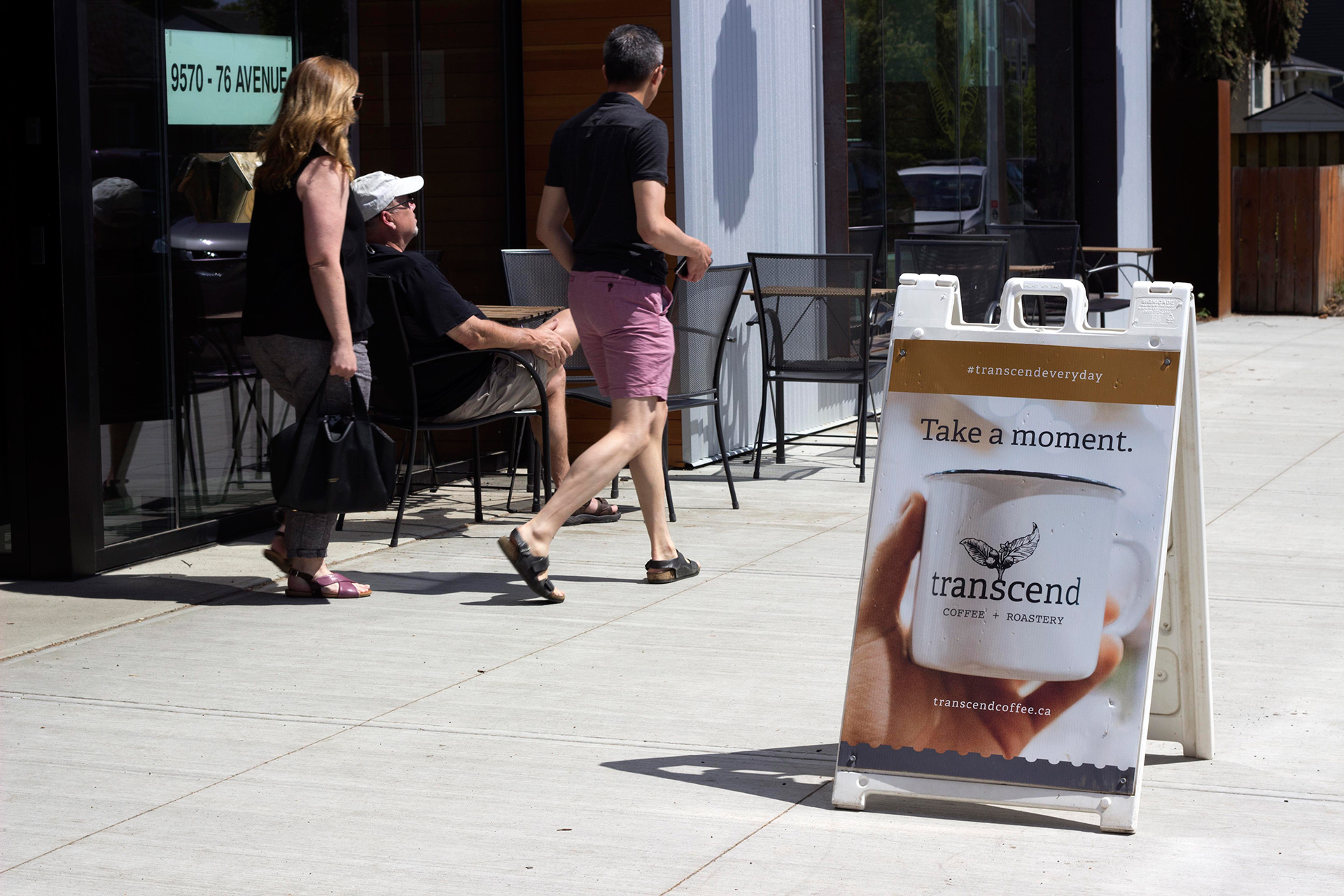 Transcend Coffee occupies a venerable place in Edmonton’s coffee scene. The company’s flagship location—a combination coffee bar and roastery in an industrial area south of the city’s trendier neighborhoods—opened in July 2006 and was almost certainly Edmonton’s first Third Wave cafe. And one could make a convincing case that it was Transcend baristas who first introduced Edmontonians to rosetta-covered cappuccinos and tasting notes for coffee that, the baristas went to great lengths to explain, were not “flavored,” just complex.

Owner Poul Mark—formally trained as a lawyer—was self-educated in terms of coffee. At the beginning, he didn’t even have a skeleton crew working with him. “I was the barista,” he smiles wryly, “I was the cashier.”

Ironically, Mark wasn’t even certain he wanted to serve coffee, much less introduce a new form of coffee culture to the capital of Alberta. The original plan was to open a wine and coffee bar, but the industrial space that Mark had become interested in wasn’t appropriate. Not to be deterred, Mark homed in on the possibilities of pure, unaided, unadulterated coffee. “I was more interested in the notion of building community and needed a place,” he says. “Coffee is this thing that people gather around.” A lot has changed since those early days (“we’re better at it,” Mark laughs), but building community is still a priority—evidenced in the company’s Garneau cafe (next to an independent theater and a poutine place just a few blocks off the University of Alberta campus), and its most newly opened location in the Ritchie Market.

His desire for community—and growth—was motivation enough for Mark to start roasting. “Obviously the focus has always been on quality,” Mark says of his company’s established sourcing program. His main challenge, he says, has been in building long-term relationships with growers, many of whom work small farms from which Transcend buys green beans directly.

As a small-scale buyer with high standards, Transcend has taken on the twofold task of educating its customers about coffee as a product that varies with the year and environment, while at the same time encouraging farmers to produce the caliber of green coffee that boutique companies will pay a higher price for. Mark says that this kind of dialogue with farmers is getting more and more difficult as farmers face mounting pressure from the global economy on one hand and climate change on the other. Nevertheless, the roasting side of Transcend’s business has doubled in the last two years. The company roasts about 160,000 pounds of coffee a year and supplies cafes and retailers across Canada.

Eleven years in, Mark’s once one-man operation is one of a plethora of local coffee companies that form a small but vigorous community servicing a growing market for a type of coffee experience that was virtually non-existent in Edmonton a decade ago. And now that he’s got a whole team of people to run the show, he finds he’s more effective behind the scenes. “I’m a classic entrepreneur in the truest sense,” he says. “I dream up ideas.”

Mark’s developing business philosophy is evident in the company’s current physical manifestations: two cafes in young, mixed residential and commercial neighborhoods that have plenty of pedestrian traffic and a strong sense of community to support them. And Transcend’s newest location, a cafe/roastery in the new Ritchie Market, arrived on the scene this March, just ten blocks north of Mark’s original roastery (now closed). Transcend Ritchie is one of several businesses occupying places in an open-concept marketplace that will soon include a cycling store, brewery, butcher, and restaurant. The building—a high-ceilinged, many-windowed take on Edmonton’s favorite type of architecture, the brutalist box—features a large cafe space, with Transcend’s bar and Velocity Cycle on one side, Acme Meat Market’s cold case on another, and the soon – to open brewery/restaurant visible through glass walls on the third. Transcend’s hulking orange Probat roaster has been installed in one of the front windows, and roasting operations can be observed from both inside and outside.

Similar to Transcend Garneau, the Ritchie cafe is minimalist and vaguely industrial. Under a canopy of exposed beams and pipes, small potted plants and succulents grace blonde wood tables and two long counters fully equipped with outlets for the laptops that nearly everyone in the cafe is using. Exposed copper, steel, and concrete complement the view of both Transcend’s roasting operation and the banks of brewing tanks on the brewery side of the building. There’s limited patio seating outside, where customers can enjoy Ritchie’s lively sidewalk community while they sip their coffee. in the women’s bathroom, however (I didn’t venture into the men’s), both the walls and the floor are covered in a Wes Anderson-esque pattern of pastel tiles that is surprisingly soothing to be surrounded by. Transcend has moved away from its old purist approach here, and at Ritchie, baristas serve up Jagasilk matcha, cascara tea, flavored lattes, and even milkshakes along with FETCO– and Moccamaster-brewed coffee and cappuccinos. Espresso is pulled on a three-group Victoria Arduino Black Eagle. The state-of-the-art machine features, among other perks, built-in scales and the capability to electronically sync with a grinder, making it easier to implement a standard for dialing-in based on a set ratio of ground beans to liquid espresso. Steaming and pouring takes place on the Modbar unit installed in the front bar. House pastries, including cookies, banana bread, and croissants are displayed in a glass case underneath the point of sale. Transcend Ritchie has enjoyed an enthusiastic welcome from both residents of the surrounding area and from coffee drinkers across the city. The cafe is constantly busy; at times it’s tricky to find a place to sit. “Given the reception Ritchie has had from the community,” Mark says, “we’ve thought about replicating this.”

Whatever the future holds for Transcend, the move the company has already initiated—away from trendy shopping districts and toward cafes embedded in the communities where Edmontonians actually live and work—can only guarantee its legacy as a forerunner of the city’s cafe culture.