A Toronto architect who led the design team for an award-winning pavilion in Borden Park says Edmonton architecture is starting to attract attention outside of Alberta.

“I think the whole culture of architecture in Edmonton is really … frankly, it’s become interesting to the rest of the country,” Pat Hanson said Wednesday.

“I think [Edmonton has] served as an example about how civic architecture should be dealt with.”

Hanson, a founding partner at architecture firm gh3, spoke about the Borden Park Pavilion — which won a Governor General’s Medal in Architecture this week — on CBC Radio’s Edmonton AM .

She praised the City of Edmonton’s procurement process and said Edmonton has served as an example to the rest of the country of how to handle civic architecture projects.

In 2011, the city held a design competition for five park pavilions. Hanson’s firm won two of those assignments — one in Borden Park and another in Castle Downs Park.

The Borden Park pavilion was among 12 buildings honored with Governor General’s medals on Monday.

A city building has not won the honor since 1992, when Barry Johns Architects earned an award of merit for the Advanced Technology Center building in the Edmonton Research Park.

The Royal Architectural Institute of Canada, which created the awards and administers them jointly with the Canada Council of the Arts, used to hand out both medals and awards of merit.

The pavilion is a small amenity building with washrooms and storage space. It had a construction budget of $2.1 million.

What makes it unusual is its circular shape and walkway. From the inside, visitors can see panoramic views of the park.

From the outside, the building’s triangular pieces of floor-to-ceiling mirrored glass reflect their surroundings.

From some vantage points, the building blends so well into the scenery that it can hardly be seen. In the evening, it lights up, resembling a cross between a toy drum and a lantern.

The jury for the award called it a “refreshingly well-considered and carefully designed object of fascination within what is the usually neglected program of park infrastructure.” 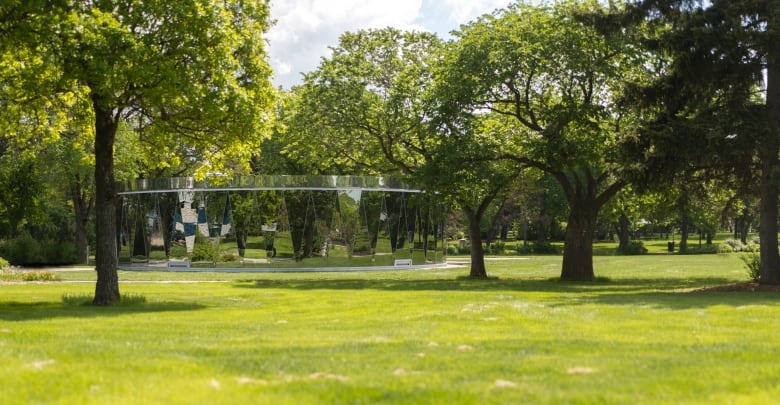 The Borden Park Pavilion blends in with the trees in the east Edmonton park. (Royal Architectural Institute of Canada)

Hanson said her team took inspiration from the park’s existing features — six paths converge in a circle that surrounds the pavilion area — and from its history as an entertainment destination.

According to city records, East End City Park opened in 1906 and received a new name in 1914, after a visit from Prime Minister Robert Borden.

In its heyday, the park was a popular summer spot for swimming and picnics. Over the years, it has boasted a zoo, open-air concert theater and amusement-park attractions, including a wooden roller coaster and carousel.

Hanson said the carousel inspired the team’s conceptual vision for the pavilion.

“We tried to develop architecture that engages the public,” she said.

Acheson-based Jen-Col Construction Ltd. was the contractor for the pavilion and staff celebrated the news of the award this week.

“We were all doing high fives and jumping around and really excited,” said Cory Jodoin, Jen-Col’s president.

Jodoin said he’s proud of everyone at his firm who helped get the building built.

“It took a lot of people in order to design it, plan it, built it, for it to turn out the way it did,” he said.