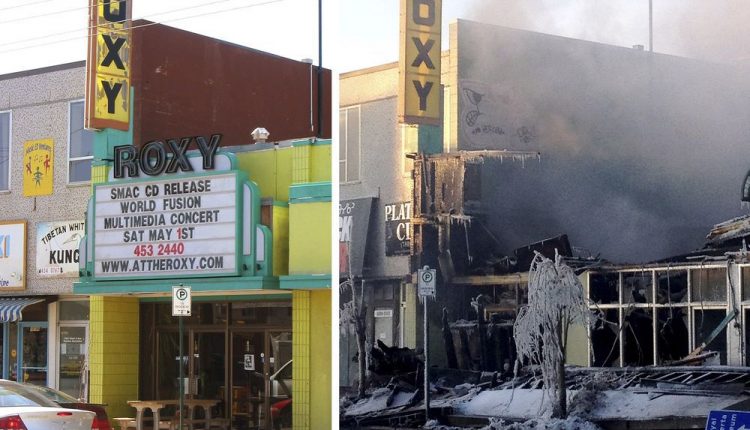 Thanks to new entry funds from the federal government, Theater Network is continuing plans to build a new Roxy theater on 124 Street.

On the left is the Roxy Theater on May 4, 2004. On the right-hand side, the historic theater burned to the ground in an early morning fire on Tuesday, January 13, 2015. Photo by David Bloom /Postal media

When the Roxy Theater burned down three years ago, it left a void on 124 Street that was never closed.

Sure, 124 Street is booming these days, filling up with all sorts of new restaurants and bakeries and spas and boutiques and bars, creative new independent shops that are gradually replacing the old pawn shops and cash shops.

But when the Roxy was reduced to rubble, the street lost its entertainment element. The old cinema from 1938 was home to Theater Network, one of the city’s most dynamic production companies, for decades. Theater Network advocated new Canadian works. It hosted the NextFest festival for emerging young artists. And it brought street life and diners to 124 Street.

“The Roxy have been an integral part of our community for 80 years,” said Jeff McLaren, executive director of the 124th Street Business Association. “The theater was the cultural heart of the street. By the time the Roxy is up and running again, the 124 will be missing some of its cultural soul. “

Now Edmonton theater lovers and Edmonton urban renewal fans have a reason to celebrate. The federal government on Friday announced a $ 330,000 grant for the Theater Network to begin design work for a new Roxy theater on the old site north of 107 Avenue.

The money, which was pledged by Edmonton Center Liberal MP Randy Boissonnault, comes from the Canada Cultural Spaces Fund. The city of Edmonton has also topped up $ 208,000.

Bradley Moss, artistic director of Theater Network, says the money will allow the theater to do all of the preliminary design and engineering to get a new performance space ready. The theater commissioned the Edmonton architecture firm Group2 to design the new facility.

“Theaters are boxes. But they are special boxes, ”says Moss.

Moss wants to build a theater with 200 seats, a smaller “black box” theater with 80 to 100 seats and a rehearsal hall. These three rooms, he says, would provide the flexibility to host music and dance series, indoor farmers markets, community meetings, and other events.

And while he’ll always miss the nice, creaky, welcoming old Roxy, Moss admits it’ll be nice to have new washrooms – not to mention air conditioning. (It was too hot in old Roxy, he says, to host summer events. Air conditioning would keep it going all year round.)

Moss expects the final budget to be closer to $ 10 million to $ 12 million.

“Fortunately we had a fire,” he says ironically.

That means they already have $ 2 million in insurance in the bank. An additional $ 890,000 in insurance will be delivered once construction begins.

After that, they will ask the federal government, province, and city for $ 2.5 to $ 3 million each. They hope for the rest from corporate and private donors.

Moss wants to start construction by 2019 – and open the theater as early as 2020. The schedule is ambitious. But Moss is motivated.

Since the fire, the Roxy has rented the Edmonton Jazz Society next to the Yardbird Suite on Gateway Boulevard. The seat in the theater district Old Strathcona has its advantages. But Moss desperately wants to go back to 124 Street. In his view, Edmonton’s theater community is healthier if it is not concentrated downtown and along Whyte Avenue; For him, 124 Street and its surroundings are the third point in a theater triangle.

Boissonault sees it that way too.

“It’s a cultural icon in my own neighborhood,” he says. “We knew the great value that Theater Network and Roxy Westmount bring to Inglewood, the center and the whole city. The arts lead us out of the digital world and back to the things that move us – and they are also a major economic engine. “

As for the question of more federal funding to actually get the theater built? Boissonault says that it is also important that the province strengthen itself.

“We need all three levels of government to do these things.”

So yes. We are still a long way from shovels in the ground, especially since the province pinches every penny. But Moss is not deterred.

And McLaren? He can’t wait.

“This is fantastic news,” he says. “Until the Theater Network is back, 124 Street won’t be itself.”

Subscribe to our Provincial Affairs Podcast, The Press Gallery, iTunes, or Google Play.

Free issues to do in Edmonton in July 2021