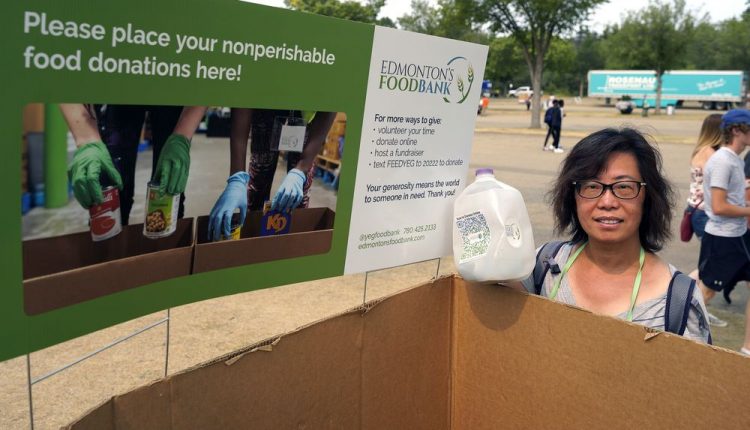 After missing their biggest fundraiser last year, Edmonton’s Food Bank was back at William Hawrelak Park for that long weekend, accepting food and cash donations during the Heritage Festival.

Managing director Marjorie Bencz said the Tafel was happy to be physically back at the festival, but was also accepting donations in other ways due to the COVID-19 pandemic.

“We encouraged people to drop things off at grocery stores or post online so there was less touch down here,” she said. “We are present at three locations because we know of course that people are used to bringing food and money here.”

Bencz said the goal of the festival is to collect typically 50,000 kilograms of donated food, but this year’s goal is 40,000 pounds to celebrate the organization’s 40th anniversary.

“I think we’re about halfway through considering what has happened in grocery stores Monday through now,” she said. “Our trucks also pick up from the branches today and we hope that they will come back full and that we will be back tomorrow.”

After missing out on last year’s festival, Bencz said it was important for the organization to be back in the park to celebrate the city’s diversity.

Bencz said the Tafel’s staff are also diverse, speaking a total of 19 languages ​​- that number increases when you include volunteers.

“We have always been very proud to be associated with the Edmonton Heritage Festival because it celebrates this diversity in our community,” said Bencz.

“It’s so inclusive, it’s such a big festival and it breaks barriers.”