Steve Batke of Faunts describes his musical process as being very slow. 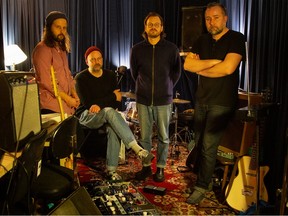 Steve Batke of Faunts describes his musical process as being very slow.

So slow, in fact, that the Edmonton-based band hasn’t released any new music since 2019 when the song There Will Be Blood suddenly showed up on Bandcamp. The local electro-dream-pop four-piece has been shifting in and out of hiatus since its last album, Feel.Love.Thinking.Of was released in 2009, with a scattering of EPs intermittently dropping through the last decade. This makes the band’s appearance this Thursday at the Starlite Room as part of the Winterruption festival all the more exciting.

We apologize, but this video has failed to load.

So why now? A new song? Plans for an album later this year? A final farewell show?

“Well, (festival producer) Brent Oliver kind of asked us and said it would be opening for Holy F–k, we were like, ‘Yeah, sure, why not,’ says Batke. “A lot of us have kids, but they’re bigger now so it’s a little easier to schedule practices, and we jumped on it.”

Seems kind of prosaic, doesn’t it? Here’s how it looks from Oliver’s perspective:

“I texted the bassist, Scott Gallant, and asked who should play on the show, with a comment something like, ‘I would have asked Faunts, but well, you know,’ implying my belief they were done as a band. I think he took that as a challenge, asked them, and one day later he texted back, ‘We’re in.’”

If it took some mind games from Oliver to corral one of the most beloved bands in our city’s musical history, well, so be it. Pandemic memory may be glitchy, but it feels as though the last time Faunts performed live was at a memorial for a friend back in 2018. This was after building a healthy fan base via the critically-acclaimed and commercially-successful Bioware game Mass Effect, which used the Faunts track M4, Pt. II, in the closing credits.

There are day jobs and families, of course, but Batke has kept busy with composing and recording, Gallant is an artist, drummer Paul Arnusch remains a constant in the scene with bands like Wet Secrets, and singer/multi-instrumentalist Tim Batke fronts the also often absent musical collective Duplekita.

We apologize, but this video has failed to load.

All that being said, when the call is issued, everybody answers.

“The market is so saturated with music,” notes Batke, who with the band has been working on a series of EPs entitled Ostalgia since 2016, when the first, and only one, came out. “We’ll put out music once we’re really happy with it, but that can take a long time and we have busy lives. I wouldn’t have it any other way because eventually if you have to do it, I feel like you begin to resent it. If you do it because you love it, it stays fresh. So, unless we’re interested, we just stop and take a break.”

Batke says the band has been diligently rehearsing for the show, which sees them in a sweet spot just before the headliners at the Starlite Room, one of Edmonton’s largest venues. They’ve gone through their discography for the first time in years, picking out songs that suit who they are now, and marveling at how music that reflected who they were when they first started now feels like it came from a completely different band. Also, in keeping with their new image as naturally occurring dad-rockers, they’re opening up the stage to the possible next generation of Faunts.

“When my kids were quite little, it wasn’t as much of a joy to rehearse,” Batke reflects. “It was more of a struggle at times. Now it feels much different playing live, especially because we’re going to have my daughter on for a couple of songs, and Scott’s daughter is going to play some guitar. You’re never really sure if your high-school kids would want to play with their 40-year-old dads, but they both said it would be fun. I’m really looking forward to it.”

When Thursday at 8 pm

tickets $24.66, in advance from starliteroom.ca