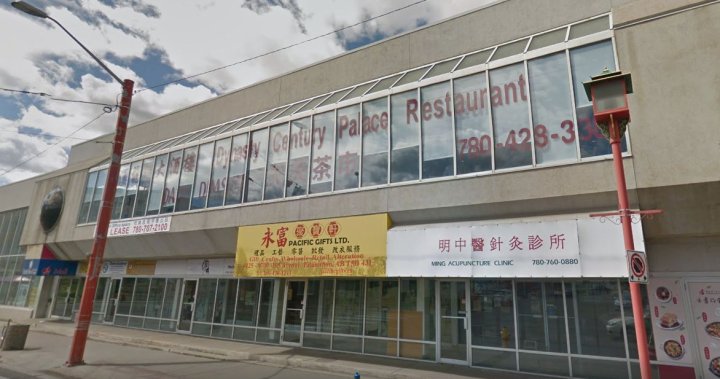 For the second time in less than a month, Alberta Health Services closed a downtown Edmonton restaurant for unsanitary conditions, including cockroaches in the kitchen and food stored in unsafe conditions.

The Dynasty Century Palace Restaurant at 9700 105 Ave. Chinatown was closed on October 16. The restaurant is a hangout for the city’s Chinese community and has a history of health violations.

READ MORE: The Edmonton murder victim was a prominent member of the Edmonton Chinese community

AHS identified nearly two dozen issues that “could be dangerous to public health or in any way hinder the prevention or suppression of disease,” including:

2:07
Investigation of the E. coli outbreak at the Edmonton restaurant

The restaurant has a history of poor conditions. Hygiene and food safety issues have been highlighted several times in AHS ‘two year inspection reports published online.

Problems identified in the past include wooden dim sum bowls with food scraps or debris accumulated inside, improperly storing or thawing food and at dangerous temperatures, and using dirty rags alongside inadequate and inconsistent cleaning solutions, previous evidence of cockroaches.

AHS said the latest inspection revealed that the restaurant appears to be in breach of an executive order issued on September 19, 2017.

The restaurant’s owner, Thang (Tom) Ly, was directed to comply with a long list of demands, including:

AHS said Monday afternoon that a health inspector returned to the restaurant on Saturday October 22nd and all of the above conditions were met so the restaurant could reopen.

In 2016, the owner of the restaurant was fined $ 42,000 after health inspectors found cockroaches and dirty kitchen conditions back then, too, according to the Edmonton Journal.