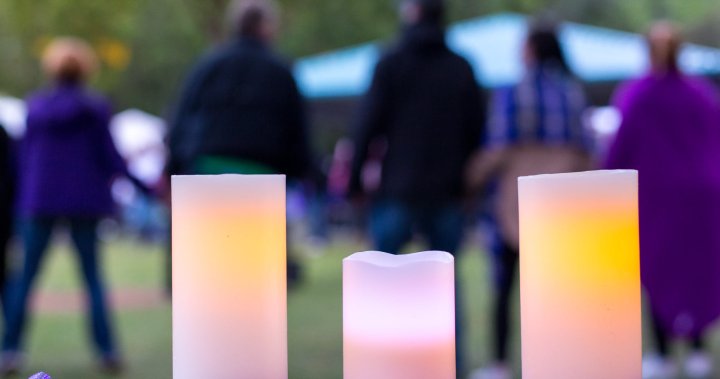 As Edmonton’s opioid epidemic rages on, one organization continues to advocate for those struggling and the families who have lost loved ones to drug poisoning.

“We need to heal with others who need to heal,” said Angela Welz, current member and former board member of Mom’s Stop the Harm, and support group facilitator.

Welz lost her 18-year-old daughter to a fentanyl overdose in 2016 and has been active in the community ever since. She describes her daughter as brilliant and athletic.

“She was not your normal drug user that you would think… she was a young girl experimenting and she got a toxic batch of drugs and died.”

There has been an overall increase in opioid-related deaths since the beginning of the pandemic provincial data shows, with Edmonton having its highest death toll in Nov. and Dec. 2021. While deaths have declined since then, there were still 42 drug-poisoning deaths in Edmonton alone in June.

The provincial government has celebrated this decline.

However Welz said it’s not really a positive, overall.

“At the end of the day, one is too many,” she said. “It doesn’t seem the rest of society understands what these deaths are doing to families. Why are we allowing five people a day in Alberta to die from toxic drug poisoning? It just doesn’t make sense to me.”

Alberta’s government has slowly rolled back its harm reduction response since the spring, option for a more abstinence-focused approach. But prohibition, along with a toxic drug supply, is what’s killing people, Welz said. There needs to be both harm reduction and recovery-focused options for people, she said, and that’s not what we’re seeing in the city right now.

“We have to take it from the downtown core,” Welz said of, because “it’s the average middle class person who will experiment (with substance use) that’s dying.”

Data from the Alberta Health Services Substance Use Surveillance System shows that 73 per cent of opioid-poisoning deaths in Edmonton are males, and 27 per cent females, with the highest average age range between 35 to 39 years-old. The data is not reflective of social status.

Fentayl is the leading cause of accidental opioid poisoning deaths in Edmonton and across Alberta.

There are 150 member families in the Healing Heart peer support groups in Edmonton, and Wednesday’s event organizers expect a turnout of closer to 400.

“We encourage everyone who’s been effected to come out to the evening,” said Welz. “We’re there to lift each other up.”

The event starts at 6:30 pm in Victoria Park Site 6 and will include an Indigenous blessing, candlelight vigil and Naloxone training from Boyle Street Community Services.

The High Level Bridge will also light up in purple to celebrate those lost to opioid overdose.

This year the organization launched the Purple Chair campaign, for which “members have painted chairs in the overdose awareness color purple, to represent the empty chairs we have in our homes and at our tables,” reads a release from Moms Stop the Harm.

The organization “has sent a purple chair to the federal Minister for Mental Health and Addictions, Carolyn Bennett to drive home the message about the lack of coordinated public health response to the ongoing crisis.”

15 of the very best issues to do that lengthy weekend in Edmonton: September 2 to five