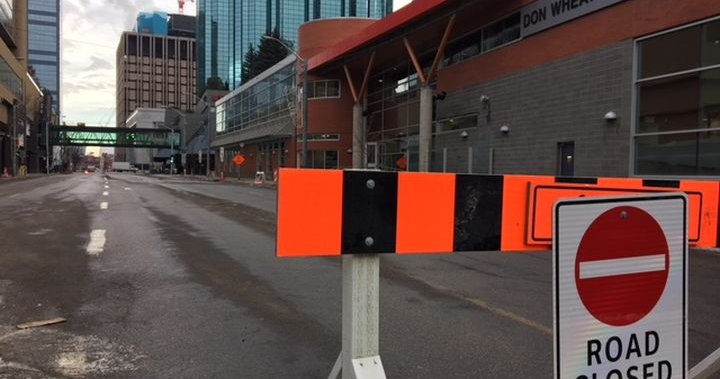 In a very close vote of 7-6 Monday, Edmonton councillors voted in support of closing the traffic lane on 102 Avenue (from 99 Street to 103 Street) to make a “pedestrian-friendly corridor” for one year.

The pedestrian avenue would still provide access for emergency services.

The motion asks administration to: “Prepare a road closure bylaw for the full closure of the traffic lane on 102 Avenue between 99 Street to 103 Street for a one-year pilot, and that activation projects be considered as part of the downtown vibrancy grant program that administration work with local stakeholders for implementation.”

City committee narrowly approved the idea at the end of May, pushing it to council as a whole.

Should downtown Edmonton’s 102 Avenue be pedestrian only?

The avenue has been closed for the last three and a half years for Valley Line LRT construction. It was set to reopen — with sidewalks, bike lanes, LRT tracks and a single eastbound lane for drivers — before councillors discussed a pivot.

“There’s been, I would say, considerable interest from a lot of Edmontonians to sort of reimagine what this street could be — turn it into more of a vibrant, walkable area,” explained Ward Metis councilor Ashley Salvador.

She put forward a motion for a one-year pilot project that would see pedestrians and cyclists – not drivers – rule the downtown corridor between 99 Street and 103 Street when it reopens.

Representatives of the Don Wheaton YMCA raised concerns with the idea. Staff and members of the downtown location have been dealing with traffic congestion and parking issues for nearly four years — nearly twice as long as the LRT project was supposed to take.

“It’s quite frustrating for our members and our parking customers,” said Kent Bittorf, vice president of fitness, health and aquatics, on May 31.

The rec facility has also faced safety concerns, locking some doors for security.

“We’ve seen a dramatic increase in social disorder in and around our facility with the closure of 102 Ave.,” Bittorf said.

Exploring a car-free avenue in Edmonton

However, Coun. Salvador felt the road closure for the LRT construction presented an opportunity.

“Folks have adjusted their travel patterns,” she said at the committee on May 31. “They’ve been used to this portion being closed for quite a while. I think this is a real opportunity to test out this idea, see if it works.

“I think there’s also opportunities for activation with events – maybe markets, having patios set up or food carts, for example – to get people out, enjoying the space, connecting with one another as well.”

Could 104 Street become a pedestrian promenade in downtown Edmonton?

She added there are no additional funds required for the pilot outside of the existing budget.

The YMCA was not thrilled with the last-minute change of plans.

“We were in meetings years ago around what was to be, at the end. And now, at the end, it’s being proposed to change again,” explained Ken Muggeridge, vice president of assets and capital projects.

“So I just don’t think that was fair.”

The JUNO Awards are coming again to Edmonton subsequent yr