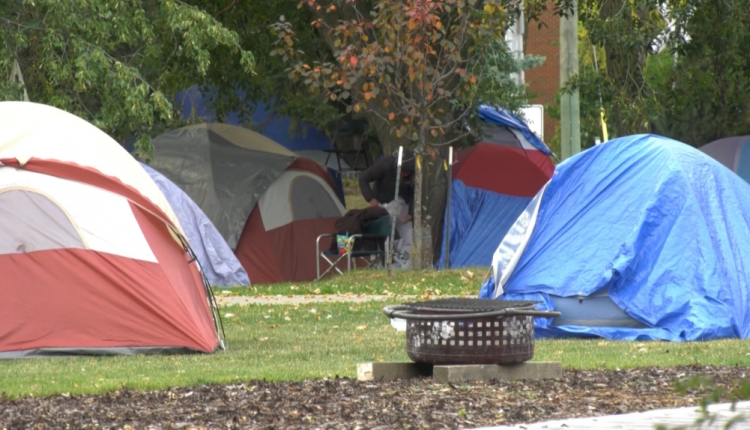 In an effort to address homelessness in Edmonton, the city is exploring the possibility of sanctioned homeless encampments.

According to the city, there are around 2,800 homeless people in Edmonton and one councilor estimates that around 800 are living in encampments.

“It’s just so heartbreaking to be in a situation where you’re moving people along, they have nowhere to go, and what are we expecting to change if we’re just keeping doing the same things over and over again?”

On Monday, Stevenson asked city staff to make a report on what small scale camps with five to 10 tents could cost and accomplish.

“Crucially, the intent of these smaller scale managed encampments would be to get people ready to move into the permanently supportive housing units that are coming online later this summer,” said Stevenson.

“That’s also intended to really mitigate one of the risks that was highlighted in the previous report around when managed encampments don’t have an exit strategy, particularly with a winter coming up.”

In April, city staff recommended against sanctioning encampments over concerns they could grow out of control and become unsafe for residents of the camps.

“In the weeks since, what I’ve really seen and heard from businesses and residents is our current encampment response, particularly in hot spot areas, is really an endless loop where encampments are removed then put up again in the same area in a few hours,” said Stevenson.

“I don’t think the city would be looking at sanctioned encampments if the level of need wasn’t so high,” added Louise Traynor, with the Bissell Centre.

The need for homeless services is outpacing resources like staff, time and funding, according to Traynor. When homeless people are continuously moved by city staff, it can also be hard for Bissell Center staff to reconnect with them.

“A lot of frustration and anxiety expressed to staff here around being moved every day and losing track of important belongings like ID,” said Traynor.

“Then for businesses and surrounding residents, it’s not addressing their needs and concerns as well,” added Stevenson. “We’ve tried lots of solutions but this is an issue that requires a lot of different approaches.”

The report is expected to be presented to council in early July. The number and locations of the camps will be decided if council approves the concept.